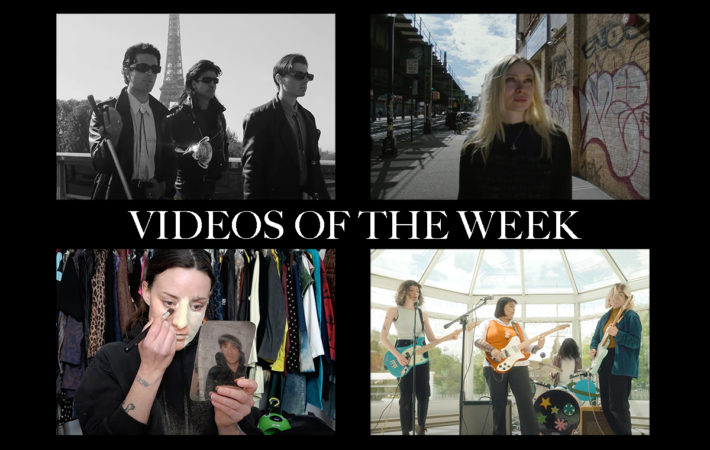 How do you feel about a stripped-down song? A distorted bass with sharp drumming, heavy guitar riffs, and the chorus front and center? Add the city of romance as backdrop for the brilliant black and white video and you get something that’s not exactly romantic but very entertaining and satisfying. “Paris” is the latest single and video by French nihilistic punk trio Bad Pelicans, announcing their upcoming album Eternal Life Now, recorded in Seattle with Dylan Wall, and scheduled for 2022 on Géographie Recs.

Momma is led by singers and guitarists Etta Friedman and Allegra Weingarten. The video for their new song “Lucky,” about a long-distance relationship, showcases authentic Brooklyn vibes:

I wrote it after my significant other and I had to spend an unknown amount of time apart from each other on opposite sides of the country. I wanted it to feel anthemic, like a sappy and sentimental love song, but I still wanted to speak on how exciting it feels to know you found true treasure with someone you are in love with.”

Montreal-based artist, producer, engineer, and remixer Patrick Holland recently announced his self-produced debut album, You’re The Boss, out 7/29 via Sinderlyn. “Nice Try” marks the first cut from the album, and features his bandmates TOPS, on backing vocals. The video is directed by Erin O’Connor, with cinematography by Briggs Ogloff, and starring Carole Méthot.

“The ghost has departed, the script is flipped – the haunter has become the haunted, and decided it’s enough.” “Nice Try” is about letting go on both sides, and reminiscing about the good times together. It was a dream come true having Jane Penny of TOPS sing in unison with me on this one, and I’ve admired Carole’s work from a distance for a while now, so when Erin proposed the concept of documenting her transformation, I was excited. Sitting back and witnessing Carole turn into a bizarro me was freaky and fun.

We agree! This is fun, hence we wanted to feature the mesmerizing video and irresistibly catchy track!

Sub*T is a female-fronted, guitar-driven band from Brooklyn. That raises hope that something fresh is happening in the scene here after much of the musical talent drained to the West Coast. The video for “Asterisk” shows the band being a band, which is still a lot of fun.