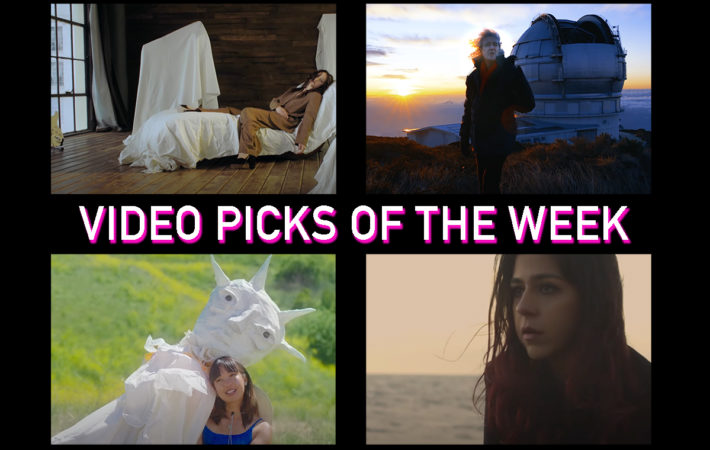 On the surface, “Looking for the Right Things” might “just” be another beautiful song and another intriguingvideo but a lot thought and also time went into it. This is a fascinating work of art that shows that an artist can get lucky and hit the right notes on the first try but sometimes good things take a little longer to take shape. A.O. Gerber says about the writing process:

I wrote this song in 2017 in a moment of exasperation, when my desire to show up as my honest self and let someone else show up as theirs felt impossibly difficult. That refrain, “Looking for the right things,” was a sort of anxious plea — this looping frustration over the distance between intention and reality, the desire for closeness and the complexity of actually allowing it. We tried to record this song for my first record and we couldn’t get the production right (irony!). As the years went on, I tried again and again to re-work it, and the repetition of that refrain started taking on new meaning. There’s anxiety in it, yes, but there’s also gentleness, self-nurturance, and even some hope — this feeling that it’s worth it to stay open, stay tender, stay messy.

There’s a bit of subtle humor in this video that I like — this song is about how frustratingly difficult human connection can be, but this video is me trapped in my dusty mind, flinging myself around in the void alone, which isn’t too far off from the truth of what happens when I get stuck in my own head trying to figure out who and how I should be in the world. There’s a sort of self-involvedness to that kind of perfectionism that I feel like this video (which was produced lovingly by Yellow House Sessions and directed/edited by Erik Shute) captures really well.

Brian May – Another World

Who doesn’t LOVE Brian May? He’s a legend and it is inspiring to see him being so vibrant and active. Brian May is one of the very few celebrities I follow on Instagram and whose updates I thoroughly enjoy. Almost every single day he’s sharing a new interesting story or tidbit and gives back in many different ways.

During the pandemic’s darkest times, his nearly daily updates were an incredible beacon of hope and joy and it is no different with his new video, announcing his second solo album. The video got filmed on location in the Canary Islands and in which Brian returns to the sites where he feels “closest to the heavens”. He says:

This beautiful place above the clouds is where I did the observing work for my PhD. And this is where I used to steal outside under the stars, with a small acoustic guitar, and strum away and sing, and, I guess, commune with the Cosmos!

Without further ado, watch the video now and stay tuned for the album Another World to come:

“Deep Waters” was already on Nadia Sheikh‘s 2021 EP “Undefined,” but she released the beautiful visuals directed by her and Rita Gratacòs just a few weeks ago. Like often these days, the results look far better than you would expect under the circumstances. Nadia recalls:

“It may not look like it, but it’s a very DIY and low budget video. It was filmed on a very cold, very windy, very wet day in November last year. It was well worth it though. It’s shot only on a handheld camera. The boys, Rita and I drove to Seven Sisters and all the outdoor shots were filmed in one morning/early afternoon. We didn’t have a lot of daylight and we only had one shot at filming this. The weather was both kind and inconvenient, but we made it work and we’re all so happy with the result.”

Vicky Farewell ‘s pandemic-induced fascination with the character Kakashi now receives a visual treatment directed by Will Sipos. You can look up how the real Kakashi looks, but Vicky had a different idea for her video. She says:

“I didn’t want to portray ‘Kakashi’ as a tangible person in this video, because they’re not physically real to begin with. Instead, I wanted them to be an even greater being, in this case a spirit scarecrow humanoid guardian, who I’d like to think represents a part of me and my sense for imagination.”