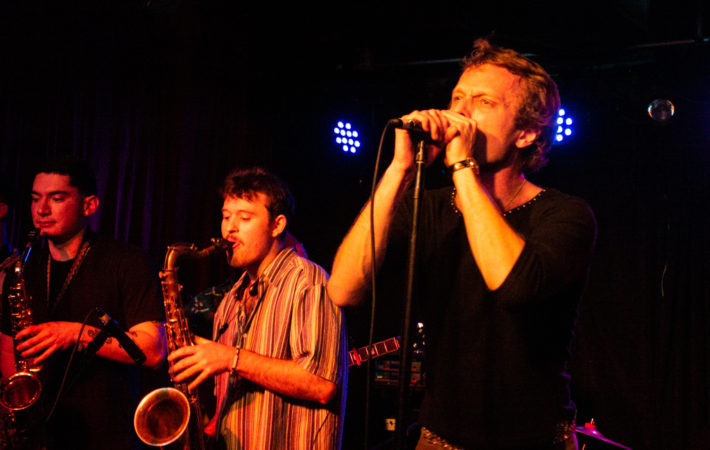 “The East Coast Hold On” marks the last single and title track of Cab Ellis‘s second album, out on May 20, 2022. While the year is still only four months old, I know that The East Coast Hold On will be among my favorite albums of 2022. One of the perks of being a music blogger is getting early access to new music and this album is spectacularly good thanks to the stellar songwriting of frontman Connor Abeles and the musical wizardry of legendary producer Gordon Raphael.

Like all tracks on the album, “The East Coast Hold On” is deeply rooted in Connor Abeles’s personal experiences and musings on life. When we recently met over coffee, Connor told me about the inspiration for the song which left me in awe and pondering the thoughts a little further. Connor says:

Over the past few years all I’ve been thinking about is why people hold onto certain things and let go of others. Why they leave and why they stay. Their job, their relationship, where they live. I was asking myself over and over. I thought of growing up on the east coast in Maryland and how the sentiment of it all was reflected in the handshake I’d do with my friends where you slap hands and lock your fingers together. “The east coast hold on”. The east coast is where I learned about hustle and intensity and love and family and brotherhood.

Learn all that Connor Abeles aka Cab Ellis has to say about “The East Coast Hold On” on the band’s Instagram account. The vibrant song is especially fascinating in its live version, with fans singing along, and participating in the actual handshake. There will certainly be more East Coast opportunities to see Cab Ellis, but here’s already one on the West Coast to put on your calendar, June 15 at the Venice West.

Listen to “The East Coast Hold On,” our Song Pick of the Day:

Connect with Cab Ellis and add “The East Coast Hold On” to your playlist as we add it to our #glamglarepick playlist on Spotify and AppleMusic: