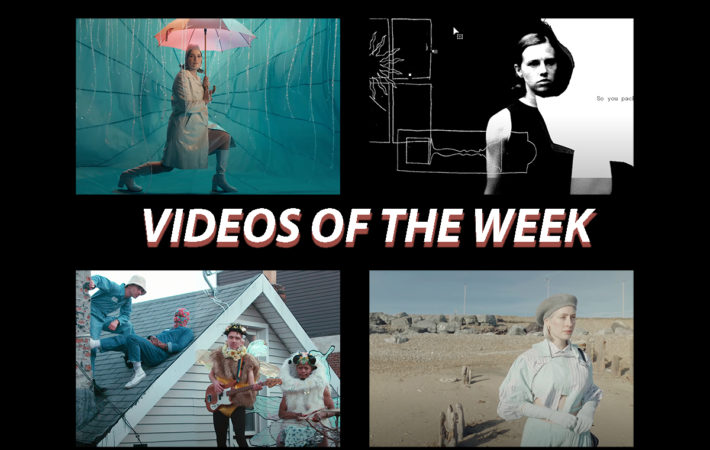 We love British singer/songwriter Katy J Pearson, as simple and down to the point as that. In case you don’t know her yet, watch her latest, absolutely brilliant video and check out her other works too. So good! We recently featured Katy J Person’s new single “Talk over Town,” as Song Pick of the Day,  yet the accompanying video, directed by Abbie Stephens, is so incredibly charming and well made that it deserves to get featured -and watched- more than once.

While technically a lyric video, the visuals to “Mirror” are presented as an artful and engaging collage. No wonder because Mogli is as much a filmmaker as a singer and songwriter. “Mirror” is also just the latest chapter in a series of videos leading up to the new album “Ravage”, out on May 12.

Mogli says about the song:

“Coming out of a relationship that suppressed who I was – someone with an abundance of emotions – I quickly developed feelings for someone similar to me. Though well-meaning, we weren’t good for each other at all and ‘Mirror’ ruminates on this battle we fought to let each other go and confronts my own toxic potential.”

Last Friday, I woke up to a song so beautiful, it made me really open my eyes and check who the song was from. Turns out, the song is called “I Might Be” and is taken from Tōth‘s latest album You and Me and Everything. Then I wanted to know more and started listening to the album, read Toth aka Alex Toth‘s bio, learned about his previous band Rubblebucket, the breakup, the heartache… and while this song is not brand new, the video is and it is so lovely, and quirky and should be seen by the world.

The video is written, choreographed, and directed by Alex Toth and Sean Smith, who also both star in it, and edited by Sara Laufer.

“Settle” is about not to. Follow Welsh singer/songwriter Violet Skies on her journey to break out of tired patterns and be bold and courageous. The video is directed by Greta Isaac.

“Settle is the song I knew was immediately meant for the album. Vocally it was the hardest to record but feels more like me than anything I’ve made in a long time. I chose to settle for a life I didn’t really want for too long and I wasted time, and I feel like we all settle – for our governments, for our climate, for love – when sometimes you need to be brave and choose otherwise.”