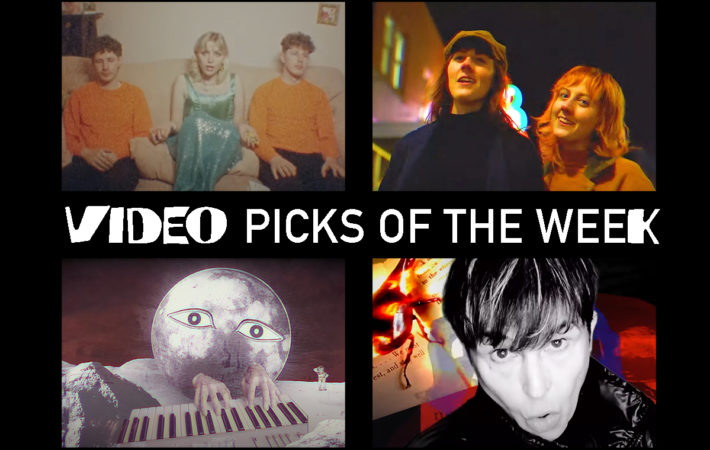 It’s Pisces season and Manchester-based singer/songwriter Abbie Ozard celebrates her sign actually everybody who knows what they want. I also can confirm that Pisces vibe well with Geminis.
Abby explains:

“After releasing songs about yearning, loss and change I was set on creating a bad bitch anthem that girls, gays, theys and everyone inbetween could feel empowered by. Pisces is about recognising your own strengths, taking control of what you really want and setting your standards high. This song was so fun to write, me and James were in stitches when we were writing it but behind the humour there’s a deeper meaning to it all. Don’t settle for mediocrity, know your worth and surround yourself with people that make you feel amazing.”

Colorado-based twin duo Companion reflect about big life changes in their new song “23rd Street.” But the way the sisters Sophia and Jo walk through town in this atmospheric one-shot video speaks more of joy and anticipation than of worries. Sophia explains:

I found myself experiencing something I can only describe as ‘pre-nostalgia’ — the realization that things will never be the same as they are now. Jo and I wrote ​this song to encapsulate the major life transformations — graduating from college, marriage, interstate moves — we experienced at that time. Eventually, they too would become part of the past, but the memory of those feelings still remains with us.”

We’ve watched “Feelin It” by Good Fortune several times in a row because we couldn’t get enough of the sweet, mellow vibe and the super cute piano-playing moon. Well done! “Feelin It” is the solo project of Toronto musician and visual artist  Kelsey McNulty, who is also a member of the band Great Lake Swimmers.

This song explores the experience of having someone very close to you suffering from depression and the helplessness, insecurity and frustration that you can feel while trying to work through it with them.  Whether a family member, friend or partner, it can be hard to know how to be there for someone and how to help their recovery without losing yourself in it.

We spent a long time working on how to portray the “puppet” character and what imagery to use to illustrate the character’s ups and downs. Going through stacks and stacks of books and pieces I’d cut out, we found images to build scenes that Adrienne and I felt gave both a sense of emptiness, as well as a sense of overwhelmedness. The puppet character was designed by artist Ira Bodnaruk. His quasi-astronaut suit represents the character’s defense mechanisms that keep them from truly connecting with the world. We used images from A Beautiful Brain in the puppet’s scenes, an incredible book of drawings by neuroscientist Santiago Ramon Y Cajal who established the basic concepts that guide our understanding of the brain today. His work is still used to demonstrate the architecture of the brain that underlies the aspects of human thought and the learning of new behaviors.

Into A Circle – Mercenaries

Into A Circle or also known as In2a0 are Paul “Bee” Hampshire and Barry Jepson. Barry (formerly a member of Southern Death Cult – a band that featured vocalist Ian Astbury and later went on to become The Cult) was introduced to Bee in the legendary post/punk band Getting The Fear. They left their other bands, and in December 1985 and formed Into A Circle together. I

It’s been a while since 1985 but Into A Circle are back because they have lots of material (still and again) and if this video and song “Mercenaries” is anything to go by, also still a lot to give. They say about their new song:

”Mercenaries” is about the power of the word and how books can shape a person, and their ideals, in both constructive ways and destructive ways.

Directed by the band’s long-time friend Mark Jordan, the video pays homage to revolutionary writers such as William S. Burroughs and Brion Gysin and Throbbing Gristle trailblazer Genesis Breyer P-Orridge, who all have played a pivotal influence on Into A Circle. Bee says about the video:

“Burroughs and Gysin showed me that there were different doors to perceive and grasp alternative interpretations but Genesis Breyer P-Orridge, and the people around them, like Peter Christopherson and David Tibet, took me through those doors. The photograph of Robert De Grimston appears because the writings of the Process Church still thrill and confound me as much as the writings in the Old Testament do.”

We’re just happy that Into A Circle are back and are looking forward to more to come throughout the year!