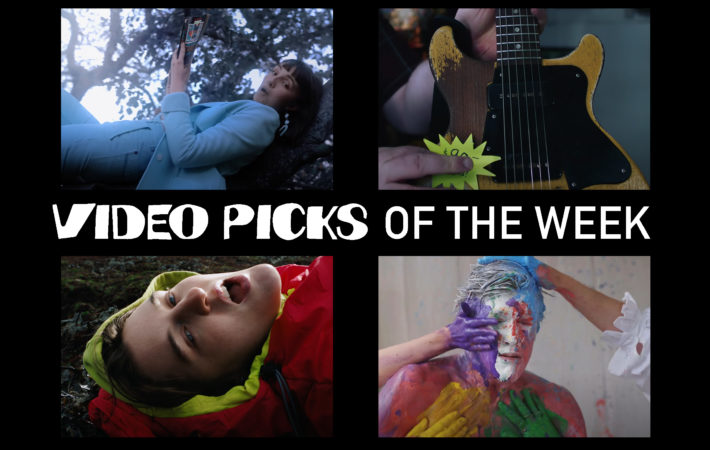 little luna – under the wave

little luna is a singer/songwriter from L.A. and a meditation and yoga teacher. “Under the wave” is inspired by the state of mind she achieves during practice. It also comes with an irresistible color-coded video.

“sometimes my mind is present and floating, sometimes my thoughts are tossing me around. when looking at release dates, i couldn’t pass up 2/22/22, as it’s a portal date with meanings that are not only in alignment with the lyrics of this song, but with the expression of the music video i directed.”
Watch the video:

One person’s old stuff is another person’s bliss and treasure. “Matilda,” the new song and video by Canadian pop-punk band PUP tells the beautiful story of a teenager happily learning to play guitar on his father’s beloved battered hand-me-down. But then, the story takes a surprising, goosebumps-inducing turn. Simply watch the magical video, directed by Jefferson Dutton, now:

In “Olivia,” Canadian singer, songwriter, and producer Tiberius b tells the story of a critical moment, and director Alice Schillaci turns it into a collage of the complexities of life.

“‘Olivia’ chronicles a fallout I experienced with my family during a precarious time where I was clumsily exploring my queerness as I moved to London. This song was made in collaboration with Cecile Believe during a residency we did together in Spain in 2018. Cecile’s production guided me in the song to transform the fragility and mistrust I felt towards myself and my surroundings into a sort of euphoric, resilient anthem.”

The original thought behind any creative venture begins life as a feeling, a sensation, which the artist then fumbles into the physical world. Original inspiration for this video came from David Hockney’s timelapse iPad paintings. The creature who is chased into the studio is inspired by the Japanese movement art of Butoh.

Catch W.H. Lung on tour, or during SXSW in Austin, because attending one of their live shows is a mesmerizing, joyful experience you won’t forget.