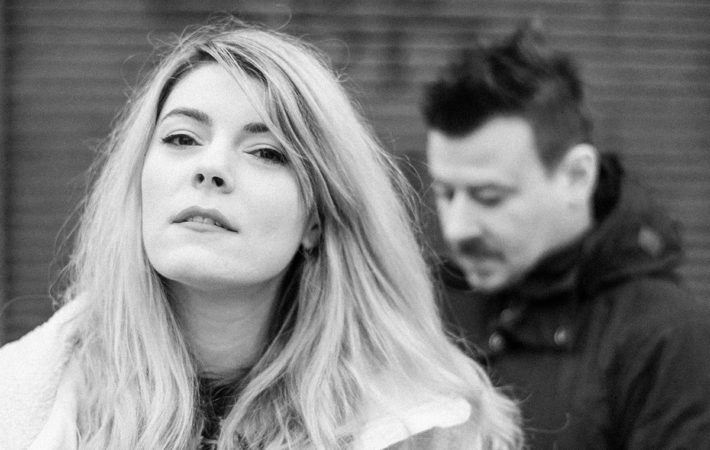 Breaking their five-year hiatus, Romanian industrial electronic duo Temple Invisible released the enthralling “Hold,” the first single from their upcoming EP Chiasm, due April 29. Comprised of Irina Bucescu and Costas Ivanov, the duo formed in 2012 in Bucharest, Romania, and have been compared to acts like Radiohead, Massive Attack, and Nine Inch Nails. It’s the exquisite electronic production paired with an edgy grittiness and the exhilarating vibes of Temple Invisible’s sound that make these comparisons so obvious. All true but there are other elements too, like Irina Ivanov’s haunting and simply gorgeous vocal delivery, something we came to love from for example -closer to home- New York singer/producer I Am Snow Angel, or synth-pop duo RYAL.

True to Temple Invisible’s signature sound, “Hold” is a rich and lush track, yet one that keeps you on the edge, because underneath the mellow tunes lurks something darker, waiting to be explored. Asked about their new single, Irina says:

“Hold” is about transforming our unconscious fascination for the past into the full force of the present moment. It is about the enthrallment that the small child has for his parents, about our perception of the feminine and masculine energies, the essential duality of our psyche, about bringing awareness to our unconscious attachment to our past and the unconscious burden of trying to recreate it. That “force” is our authenticity, which needs to be free from irrational and limiting constraints from our past, in order to bloom.

The elation we’re talking about means that we don’t want to be a “walking life situation”, but a living, breathing being. It’s no small feat – finding balance. And in that process of deconstruction there is a mixture of first becoming aware of and then releasing aggressiveness, the need to control everything and, eventually, the feeling of loss. This initial “loss” transforms into finding that inner intersection, the chiasm of our true, authentic power and the actions that align with it.

Listen to “Hold,” our Song Pick of the Day:

Connect with Temple Invisible and add “Hold” to your playlist as we add it to our #glamglarepick playlist on Spotify and AppleMusic and listen to “Hold” on any of your favorite platforms.