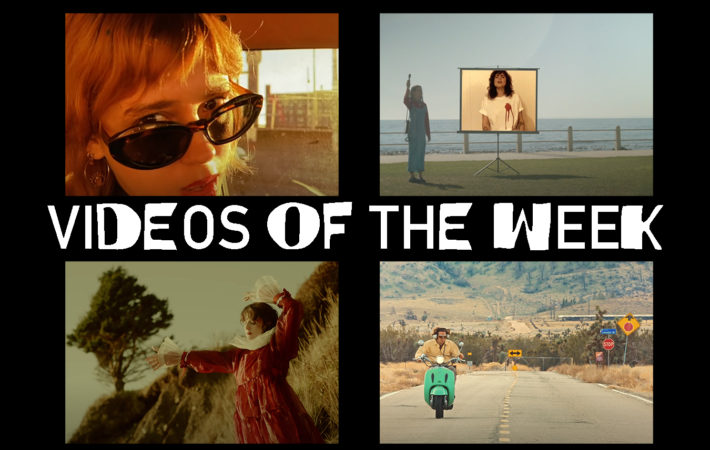 There is a dark plot going on in the video “Loverman” by the NYC duo Beau. Director Tristan Reginato captures atmospheric New York by night vibes, and the border between reality and fantasy remains blurred until the end. “Loverman” is on Beau’s brand new EP “Forever.”

They stand out, husband and wife duos. There’s either something really interesting and fascinating about them or they’re more on the lame side but with Blue Violet, it’s, of course, the case of the former. In their overall shoegaze-based sound, we also hear other influences like the hippie movement of the late 60s and early 70s and the warm and fuzzy productions of back then. When asked about their latest single and video, “Poster Girl,” Sam Gotley says:

“Poster Girl” is a song about fighting back. The character it centers around resists objectification, defends herself from evil and keeps whatever company she sees fit – in the chorus she finds herself the leader of a group of drunken sailors that accompany her on her voyage… As the writing process went on we felt that a dystopian, Orwellian setting was perfect for the female protagonist: weary traveller, fighter, lover & saviour all rolled into one.

“Walk on the Wild Side” by Lou Reed definitely worked its way into the fabric of this one” adds Sam, “but we also wanted to give it an anthemic feel. We layered a lot of guitars & synths and have two drum kits playing at the end, giving a feel that the world is kind of collapsing around you.”

Interesting… we don’t find the video so dystopian but maybe we’re missing something? In any case, it’s a cool clip and catchy track. Sarah and Sam Gotley, aka Blue Violet, have their debut album Late Night Calls coming out in April.

Jenny Berkel is a Canadian singer/songwriter and poet. For her new song “You Think You’re Like The Rain,” director Meg Hubley filmed a beautiful and mysterious video showered with golden hour light.

We love the music of Los Angeles-based singer, songwriter/producer, and multi-instrumentalist Lennon Kloser, better known under his moniker Kid Bloom. His latest single “I Fell In Love Again,” is accompanied by an atmospheric video, following the artist on a ride on his bike during the day, and then a seemingly impromptu live performance by night. I wish I could be there at exactly that moment when the sun has set but the night sky isn’t completely dark yet, listening to a guitar-shredding music genius. Kid Bloom is currently touring state-wide, in support of Bad Suns. This is certainly a fun, high-energy bill.