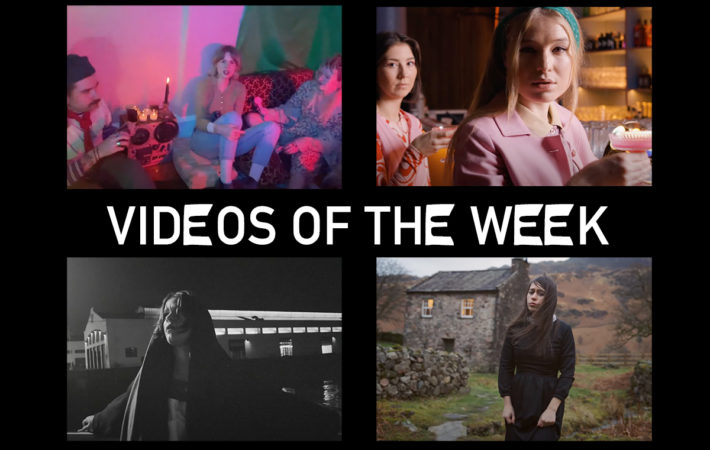 Neither music nor visuals of “Passing Stranger” are easy to classify, so Philadelphia-based quartet Empath is certainly up to something here. We see the four musicians at something like an impromptu party, but something more is going on here, and it is hard to stop watching.

It’s super easy to instantly fall in love with “Telephone Girl,” the latest song and video by Norwegian neo-soul seven-piece (sic!) Fieh. The track is part of Fieh’s upcoming album In the Sun in the Rain, out on Jansen Records, March 4. Frontwoman Sofie Tollefsbøl, who also founded the band five years ago, says about their phone anxiety-tackling song:

This song is a public apology to everyone who’s ever tried to call me. It’s not you, it’s me.

She says about the video:

Warning: This video contains orange snakeskin pants, guitar solos in the desert, girls drinking highly toxic pink drinks and dangling telephones around and other depictions of a day in the life of a NON-Telephone Girl. You could start your new telephone free life today too – just stop answering those calls. Had a lot of fun with this one, many shoutouts to Nikolai.

Watch the Music video directed and filmed by Nikolai Grasaasen.

Californian shoegazers Young Prisms announce their first full-length album in almost ten years! First track to be released is “Honeydew”, and the accompanying video was shot and directed by band member Giovanni Betteo, starring frontwoman Stefanie Hodapp. The video was shot in one take with no cuts and was inspired by the filmmakers Michelangelo Antonioni and Jean-Luc Godard.

Growing up, my grandmother would tell me that honeydew was her favorite melon. I was never fully convinced. I usually preferred cantaloupe and quite frankly thought she was full of shit because everyone knows cantaloupe tastes better. Clearly this was more of a pitch to her unwilling granddaughter. ‘Honeydew’ (the song) is about looking back on life and wishing for more, as if it wasn’t right or good enough. Hoping for a time machine to change history. Somehow that stubborn grandmother analogy makes sense now. A honeydew life won’t ever be a cantaloupe life, but it’s okay and can be just as satisfying if you accept it for what it is.

The video for “Haunted” lets you follow Jova Radevska, singer of U.K. duo Yova, through a rural landscape from a long lost time. However, the title is deceptive – the song has a hopeful message, as Jova explains:

“Listening to the voice within takes us on the right path in life. The chorus lyrics tell of that life force, powerful voice as guidance to be followed: ‘There is something inside, wild & free it reaches out'”.