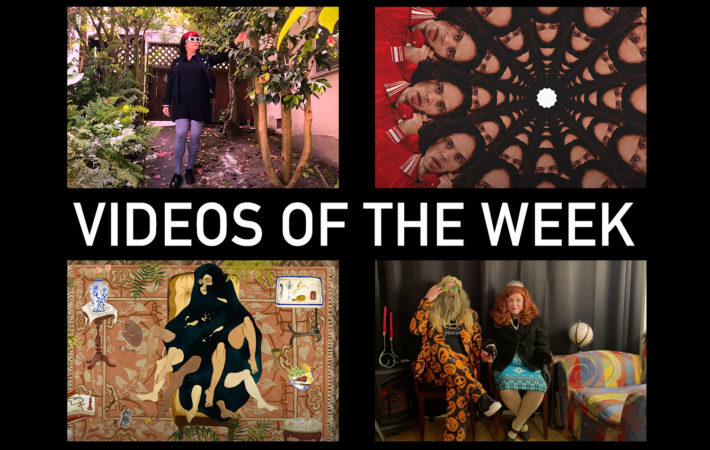 Every year around this time, the winter blues hits. Totally uninvited but definitely unavoidable and the best remedy is to create a playlist with upbeat tunes and to virtually travel somewhere sunny and nice. “Look Again,” the new song and video by California three-piece Artsick does the trick. The video shows the three band members singer Christina Riley (Burnt Palms,) drummer Mario Hernandez (Kids On A Crime Spree, Ciao Bella,) and bass player Donna McKean (Lunchbox, Hard Left) going after their every day activities and the visuals are just beautifully soothing without taking away from the cool song. Artsick have an 11-track album coming out January 21st, which is up for pre-order.

Watch the video directed and edited by Christina Riley now:

The mesmerizing and simply fantastic video “Mr. Action” by Daytona Starsky shows the artist in… action. Rarely do a song title and its accompanying video complement each other so well. I was immediately smitten by the catchy tune and its hypnotizing visuals. Super kudos to the Dutch-born and Brooklyn-based artist, who created the stunning video himself. Daytona says:

After a few years of experience behind me, I consider the song “Mr. Action” to be one of my purest portrayals of Daytona Starsky. I decided to let go of any ideas of what I wanted music to sound like and what the current sound is supposed to be and focus on writing something that simply felt like it was me. I felt the video should reflect that same idea. I’ve been involving myself more with visual work and everything involved with it for some time now, but until this moment, I did not feel like I had the chops to create a product that would be up to a standard I would feel comfortable sharing as my own. The video, aptly described as an ‘involuntary acid trip,’ takes you through a voyage of continuously transforming visuals and sequences that keeps the viewers eyes locked and hypnotised. I wanted to make sure there wasn’t a single hard cut and have the video feel as fluid as possible.

va Dominelli and Ryan Quiring created a beautiful and engaging animated video for “God Complex” by trio Gentle Party from British Columbia, Canada. Together with the elaborate instrumentation, you are in for an audiovisual treat.

MAKAR – I Want To Be Loved

NYC duo MAKAR does not need much to bring a story to life, in this case, “Petronella” by Jay Williams. They put a lot of good vibes into music and visuals, so enjoy a five-minute break from the cold January weather.