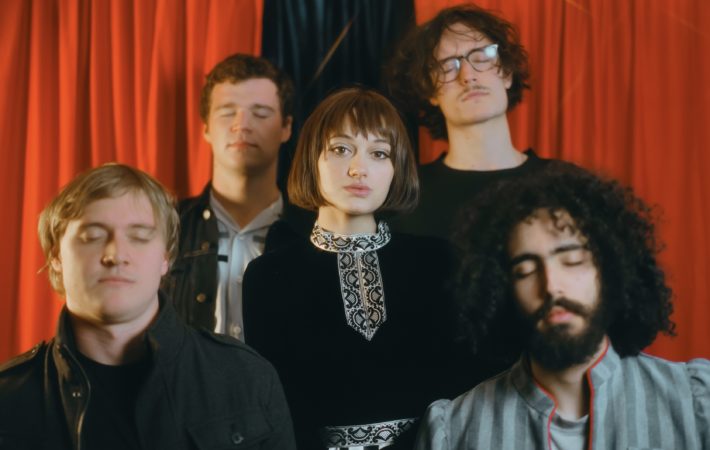 Whenever I come across “Niagara” somewhere, my thoughts instantly wander to Niagara, the music venue and bar on the Lower East Side, whose North-facing wall once graced a cool Joe Strummer mural. Is it still there? I wouldn’t know because so much has changed over the last couple of years and not just caused by the pandemic.

Naturally, I was immediately intrigued when I learned about “The Cut / Niagara,” the debut double-single by New York’s indie-rockers Slow Fiction. Turns out, singer/songwriter and lyricist Julia Vassallo also refers to precisely that bar on the LES. While we might not have hung out together at the place throughout the years, our paths had nevertheless crossed in recent months, when New York slowly revived its live music scene again, because Slow Fiction have not missed an opportunity to make a splash in the re-awakened scene. They will also be among the hot new acts to watch out for at this year’s New Colossus Festival (March 9-13, 2022.)

During a time when many artists were (understandably) on a hiatus and often used that slow(er) period for some solitary creative output, that’s when Slow Fiction banded via Craigslist ads and mutual friends. Aside from frontwoman Julia, the band is comprised of guitarists Joseph Skimmons and Paul Knepple, Ryan Duffin on bass, and Jake Chouljian on drums.

As for the double single, I dig both songs equally but decided on “Niagara” as our #glamglarepick because see above. Besides, I love the shimmering guitars, the steady drums, and Julia’s flirty power vocals that turn an earthy indie piece into an instant rock classic. We wanted to know about the song’s story, reached out to Slow Fiction, and Julia says:

Originally this track was written with some bitter intentions but with the arrangement and energy that was built up with the band, was transformed into more of a sarcastic, tongue-in-cheek song. I appreciate that as we grow, the meaning behind our music can shift, and I think that is the beauty of making art. Also, Niagara is a bar in the East Village, a classic spot you should check out, very inspirational.

True that about Niagara, the bar, but also the song itself! Let’s come together on January 20th to Berlin (another fab venue on the LES, of course!) and experience Slow Fiction’s high energy and exuberant live show when they celebrate the release of their Live Session album out via Paper Moon Records.

Listen to “Niagara,” our Song Pick of the Day:

Connect with Slow Fiction and add “Niagara” to your playlist as we are adding it to our #glamglarepick playlist on Spotify and AppleMusic: