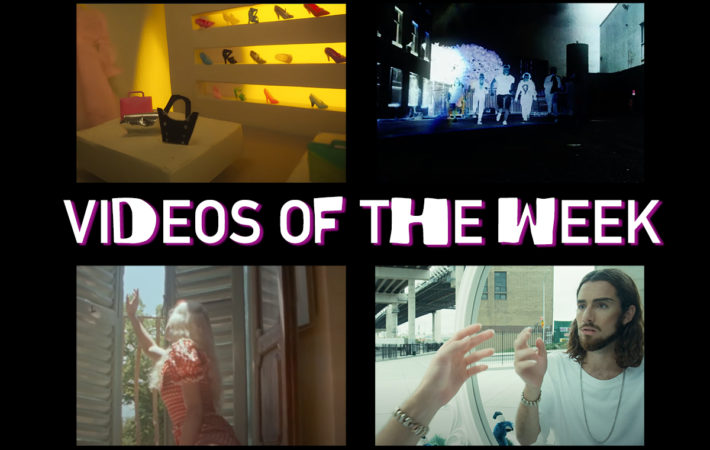 Inspiration comes from the strangest places and can take on even stranger forms, as Norwegian musician and novelist Jenny Hval demonstrates. Her newest single and video, “Jupiter,” manifests this once more. Hval says about the beautiful track and its mesmerizing video:

When I wrote the music for this song in 2015, it had no lyrics, and I did not understand where it came from. It was a strange creature that moved from one genre to the next like a slide show and crashed into a chorus full of cymbals. Six years later ‘Jupiter’ has become a post-apocalyptic road trip. It begins by the art installation Prada Marfa in Texas, but turns into a game of identification and absurd imagery. The song winds its way through a desert-scape where values, genres, representation and relationships are breaking down. It tickles our death drive and throws us into space.

In Zia’s music video, that journey has become a psychedelic hot-air balloon ride. The video crew is filmed stepping into the balloon, knowing it is dangerous. That’s how the precarious workforce, including artists and other freelancers, work: High risk, little security. We all just mean so little. The thinnest needle can puncture our lives.

I’d like to argue that Jenny Hval means a lot to many people but I get the point she’s trying to make. In the end, most of us mean very little in the big picture and it is up to us to make sense of it all.

Manchester trio Mandy, Indiana, makes no-prisoners-taken industrial pop music, and the video is a wild audiovisual ride. The bands reveal details about the making of the clip:

“A key element of the track is movement and finding interesting ways for the camera to move was an idea we thought was worth exploring. The shoot was all very improvised with extras fighting over a camera, launching it in the air, smashing it on the ground, and attaching it to a drill. The camera becomes as much the subject of the video as the people and locations.”

“Lemon Queen” is from Marissa Nadler’s recent new album “The Path of the Clouds.” The video, directed by Eden Tijerina and starring Jessica Relinda Maas Venuat, is beautifully filmed in an old Italian estate.

Marissa explained about the song:

“‘Lemon Queen’ is the name of a sunflower variety that grows as tall as 8 feet, thriving in full sun. The sunflower points its head directly towards its life force, growing tall and upright. Perennial flowers and trees watch entire generations come and go, season after season, sometimes the only constant in a sea of change. To me there’s something very beautiful about that. This song isn’t about a sunflower, of course. It’s an extremely personal and first person narrative, and the Lemon Queen is there through it all.”

A great video doesn’t need an enormous budget but a compelling idea. While we don’t know Miles Francis‘ budget, we think that their video is fabulous. Together with announcing their new album Good Man, the New York-based artist releases the fascinating title track video. Francis says:

“Good Man” is about a particular patriarchal phenomenon that I’ve grown increasingly mindful of in the men around me. It’s sung by a man who preaches progressive values, who identifies as ‘one of the good ones’ – yet he fails to recognize his perpetuation of patriarchal behavior in his own life. There are lots of outwardly ‘bad’ men out there – but it’s the ones who claim their ‘good’-ness that can be particularly troublesome and capable of causing real harm. The songs on my album follow someone wrestling with their true nature, and at the heart of that process is the question of what ‘being a man’ even means.