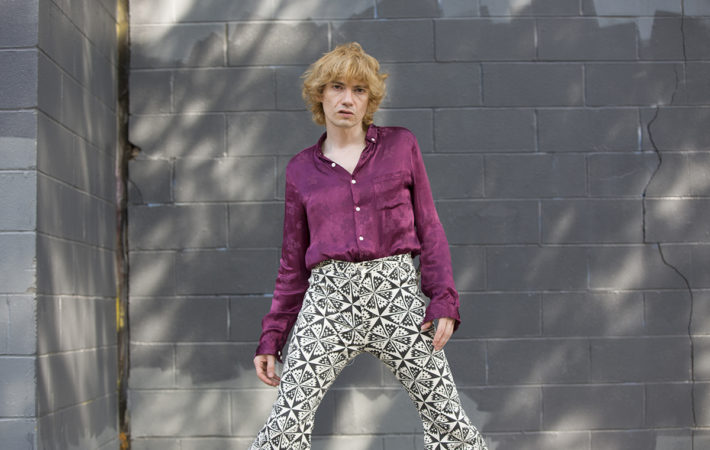 Nick Vivid‘s upcoming album No More Secrets is nothing short but sensational! I had the pleasure of spending some time with it already and I put the SoundCloud playlist on auto-repeat so much did I like what I heard. By now, three singles have been released: “Trainers,” also with a cool video, “Hush Money” and “I Wanna Reign Again.”  It wouldn’t do Vivid any justice to describe his sound with only one or two words because it is eclectic as it is eccentric, and it is nostalgic as it is modern. This is sound that makes you feel, and most likely move your body as well. I also especially dig Vivid’s bright, raspy falsetto.

As an artist, Vivid is all-encompassing. He is as much a solo-musician and a multi-instrumentalist (guitar, bass, drums, keys) as well is an engineer and producer. Raised in Buffalo NY by a blues-loving radio DJ dad and a glam rock-loving mom, who both influenced his musical tastes. Sadly though, Vivid has lost both his parents in recent years and his upcoming album deals with this incredibly bitter loss and the life lessons he has learned from what he calls “intensive meditative pandemic soul searching.”

About the beautifully groovy “I Wanna Reign Again” Vivid says:

When I’m moving against the grain of the universe, I can tell and it’s not pleasant. Things don’t flow smoothly, my ego is probably working overtime, and my instincts are out of sorts. That’s a real Sly and the Family Stone influenced bit. You can hear me copying a bit of the vibe of their track ‘Poet’ on that one. I will always proudly wear my influences on my sleeve.

And whyever not? This is fantastic and we’ll gladly dance to it at the album’s release party on November 13th, at All Night Skate in Brooklyn. Listen to “I Wanna Reign Again,” our Song Pick of the Day:

Connect with Nick Vivid on Facebook, Twitter, and Instagram and add “I Wanna Reign Again” to your playlist as we are adding it to our #glamglarepick playlist on Spotify and AppleMusic: