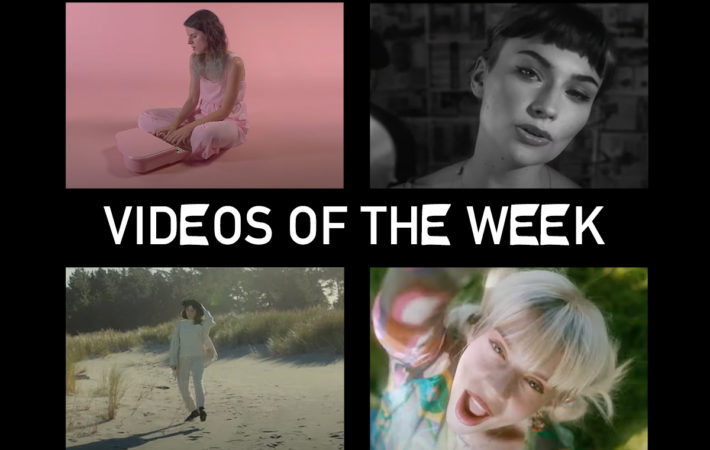 Iulia Ciobanu, singer and songwriter of Toronto-based trio Cherry Blaster, muses about getting older and crossing a significant threshold in “New Age.” The video, an inspired pink dream, is directed by Isaac Roberts.

We can always rely on U.K. singer/songwriter Chloe Rodgers to come up with good videos. For her latest song, “Bones,” director Kate Lomas skillfully mixes performance and narrative elements in color and black & white.

French for Rabbits – Walk the Desert

Another cut-off of French for Rabbits‘ upcoming album The Overflow, is the beautifully moody “Walk the Desert.” The New Zealand band delights with masterful storytelling and quirky, often surprising videos. (We’re fans!)

Asked about the last take from the album, front-woman Brooke Singer  says:

“Walk the Desert” is another song that fits into the canon of this album – it’s about big feelings, and trying to keep them contained. That feeling that if someone asks if you’re alright, you know you’d burst into tears.

The album is about to drop on November 12th, and Singer offers:

The Overflow is our album for introverts and deep thinkers – it is sort of a constellation of all the different ways in which someone can be anxious. I’m worried about the future, wistful for the past, concerned about my friends and family, having social anxiety at parties, baffled by Donald Trump’s presidency, loathing of social media, and grieving the degradation of our environment. Sounds like a total downer…but I promise it isn’t!

Perhaps it is more like a warm blanket. I’m really delighted with what we’ve made, very proud of our creation. I hope it finds its way into the right hands, and people give it a chance to sink it…I want people to listen to it loudly. Not quietly in the background…it’s an album for introverts, but it isn’t an introverted album.

“Heaven” is one of my favourite tracks from the record. It felt good to play almost everything on the track & also be able to produce it exactly how I had always heard it in my head. It was the first track I have had live strings on too which was amazing to put together. It’s a ballad written from the perspective of someone who’s no longer here, hoping for one person to always love them. I wrote it for a member of my family who passed away, so it definitely means a lot to me.