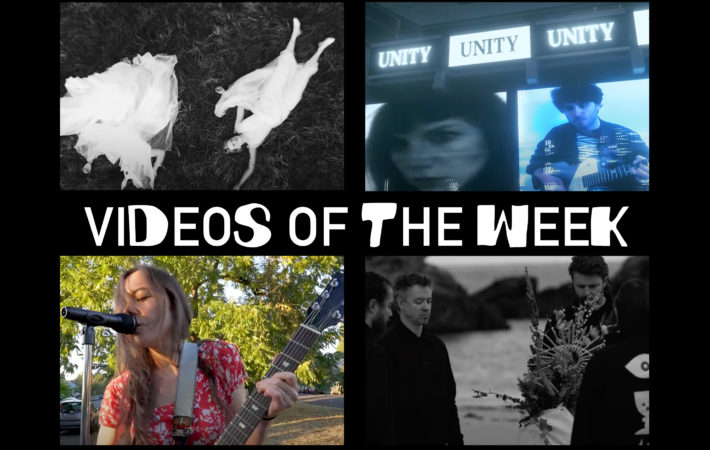 For her video “Go On,” Polish singer/songwriter Helaine Vis takes you into a strange, black & white dreamscape where she meets a mysterious figure. Immerse yourself into Helaine’s world while the song builds slowly into a massive outro. Her album “Pretty Cliche” is out this Friday.

Underground coldwave duo The KVB was formed in 2010 by singer/songwriter and multi-instrumentalist Nicholas Wood as a solo project. One year later, vocalist, keyboardist, and visual artist Kat Day joined Wood in 2011. Together, they have released several critically acclaimed albums and EPs and are now signed to Invada Records for their last album Only Now Forever. Their latest work “Unité” is as mesmerizing as fans came to love the duo. Pre-order their new album Unity, before it drops on November 5th.

What is Maria Maita-Keppeler aka Maita running from? And where is she running? In the end, she is back where she started, just in time to make some serious noise on her guitar. Maita’s album “I Just Want To Be Wild For You” is out in February 18 on Kill Rock Stars.

New Pagans – Find Fault With Me

Irish collective New Pagans released their new single “Find Fault With Me” complete with a fascinating music video. Claire Miskimmin not only is the bassist of New Pagans but she also directed the video and says:

When it comes to making the videos we usually have an improvised, see what happens on the day kind of attitude. However, knowing we were working with Dave / Macker Films put a bit more pressure on me to come up with something solid and not have Dave wandering about the Irish countryside with me while I draped fabric off rocks and trees! Dave is an absolute treat to work with, he just gets it. The video came to me fully formed, as luck would have it, over coffee one morning and I immediately had it story-boarded and sent to the rest of the band with a request to sharpen their acting skills.

She continues to provide further insight and context for the somewhat disturbing visuals:

It’s a fairy tale set in our own New Pagans folk horror universe, pitting two cults against each other. The adults represent greed, decadence, and violence. They will fight each other to the death for the trove of riches, but are usurped by the children watching from the sidelines. They are not so innocent as they’ve slipped a little poison in our drinks. Kind of like Hansel & Gretel pushing the witch into her own oven. Harsh, but we deserved it.