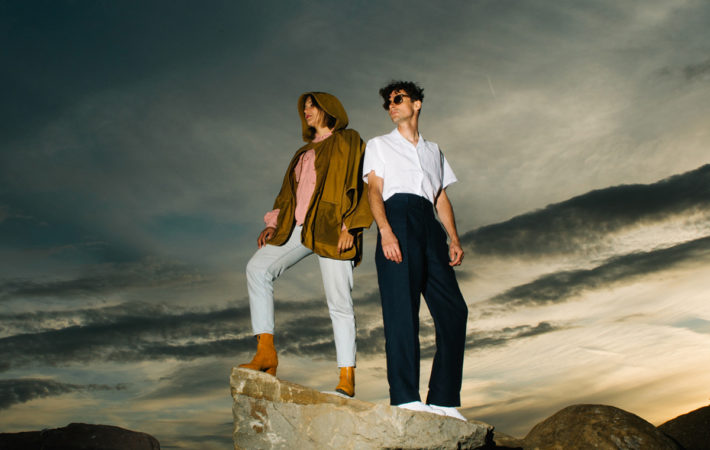 Too bad to discover a really cool band only to learn that they’ll call it quits by next month. Granted, they go out in style, releasing a farewell album and celebrating with one last live show. However, their music will live on and so we enjoy “Wet Black Trees,” the most recent single from the Stats‘ album Powys 1999 Deluxe Edition, out November 19th, 2021. The single was sung and produced by Stats’ keyboardist Nicole Robson, with lyrics by frontman Ed Seed.

Wales serves as inspiration for “Wet Black Trees,” the place where Seed grew up. He says:

Looking back, ‘Wet Black Trees’ was the starting point for ‘Powys 1999’. It wasn’t meant to be a Stats tune, but I loved the mood Nicole created. It’s a dark and nightmarish world where sinister Nature is plotting against you – it made me think of the barren mountainsides where I grew up, and flocks of strange birds waiting. When the band got together in Wales for the ‘Powys 1999’ sessions, this was the song I played everyone to set the tone, to say this is the landscape.

“Wet Black Trees” is one of those things that happened so easily and quickly, like the music was already there in the lyrics. It fell together and felt right straight away.

The setting of “Wet Black Trees” is moody and a little dark but not too dark. It evokes Fever Ray’s atmospheric allure and intensity and definitely makes me want to listen to Stats’ entire album and previous releases. What a bummer that Stats de-band but artists will create art and so we’re eager to learn what’s next for the two and would like to give the stage to Ed Seeds, who reflects:

I started Stats in 2014 as an idea: to make joyful and ecstatic music about everyday subjects usually written off as boring, like office jobs and ring roads. Over time the songs became much more personal and emotional because the idea was transformed by the people who played it: we became a band. Our group has a deep understanding of each other – not just as musicians but as people – and this sympathy creates a deep sound. Whether we’re in a studio exploring or on stage performing, Stats is a place of total mutual support and appreciation, and it goes hard as fuck too. I’m so proud of the records we made with the support of our friends Memphis Industries and of all our families. ‘Powys 1999’ especially feels like a perfect expression of what the band is about. Having reached that point I never want it to dissipate, only to celebrate it once more with everyone together: Tom Andrews, John Barrett, Stu Barter, Duncan Brown, Nicole Robson, Iso Waller-Bridge, and Ant Whiting. Thank you to everyone who’s listened to our records and come to our shows, and the countless people who’ve helped us out for no reason other than loving the music. It’s been a joy.

This will surely be a bittersweet party and we wish everybody a wonderful time! Listen to “Wet Black Trees,” our Song Pick of the Day:

Connect with Stats on Facebook, Twitter, and Instagram and add “Wet Black Trees” to your playlist as we are adding it to our #glamglarepick playlist on Spotify and AppleMusic: