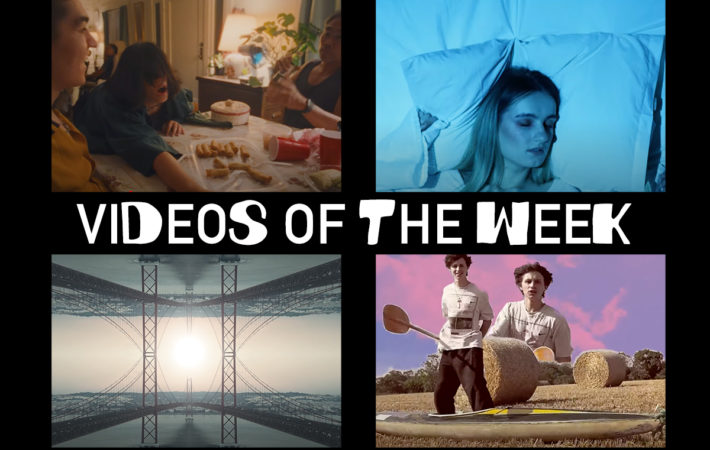 L.A. musician Hana Vu is grossly overlooked in this video, no matter how much she tries to catch attention from others. Director Meagen Houang did not take the easy route when she filmed the clip in one shot. Hana recalls:

“Shooting ‘Keeper’ was really an intense experience. We had a few choreography rehearsals leading in, and then on shoot day we rehearsed for about 9 hours and only shot in the last hour.”

U.K. singer/songwriter Imogen finds herself in an unruly night when past memories haunt her. She says about the song:

“‘Sleeptight’ deals with the societal treatment of women’s bodies and the reluctance we have to believe women’s accounts of misconduct. The premise being ‘if you don’t believe me, I hope it haunts you.’”

Quick, how many bands do you know who are comprised of not just one but two drummers? Well, the Swedish experimental duo Kidsø is one of them. Moritz Grassinger and Martin Schneider both have been tinkering with percussion instruments since they were little and are drawn to electronic music. Their latest release “Finja” received a beautiful surrealistic music video, created by French visual directors and brothers Swann and Yoann Chesnel.  The two brothers created the video out of material they collected throughout their travels. They say about their video:

It’s time to escape, to leave far away from our daily lives and to lose track of time. We are inviting you to a soft, light and surrealist journey around the world we are living in.

We came across British artist Oscar Welsh a few months ago, where he put a bit smile on our face with  his lovely song and video “Sixteen.” With his new video, he ups his game because “SW3,” another single from his stunning sophomore EP Aestival is nothing short but sensational!

There are no barriers now, and nothing standing between you sitting down, learning how to do something on your laptop and creating something. Now, I just never want to stop learning. I wanna make some really funky stuff that no-one’s ever heard before. You listen to someone like JPEGMafia and he makes this music that’s so amazing you feel like you’re about to die. I want to do that.