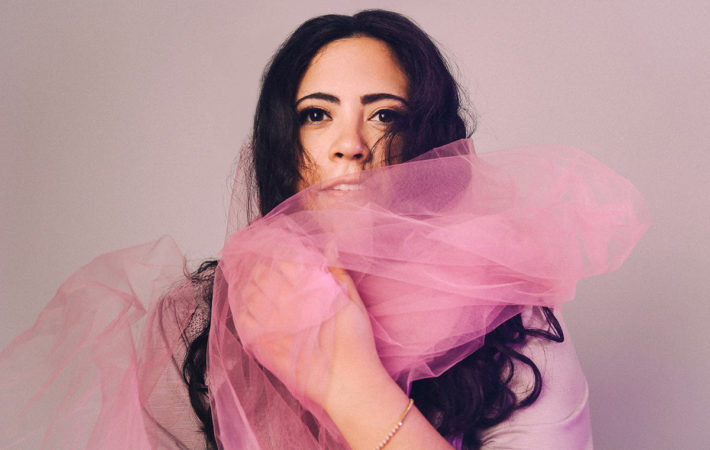 Nashville-based singer, songwriter, and multi-instrumentalist Kristen Castro makes music as Wild Heart Club. She creates irresistibly fascinating indie-pop, by blending elements from different kinds of genres, freely employing digital and analog tools as needed. While many artists these days tend to take from different musical styles and use a plethora of different instruments, Castro stands out.

Her songwriting comes from a personal place but its message is universally understood. She manages to offer intimacy with her soothing, reassuring vocals yet also keeps us on the edge. Most notably thanks to her stellar guitar work which takes on new heights in the magnificent “Glitter on the Drum.” We couldn’t be happier to premiere such a gorgeous track that makes us feel like everything is still possible as long as we still keep on believing in our dreams. Wild Heart Club’s debut album Arcade Back in Manitou is set to drop come November and is written, recorded, and produced primarily by Castro herself. We asked her about the inspiration for the utterly amazing lead single and she says:

“Glitter on the Drum” started as a guitar melody in the middle of night when I couldn’t sleep. I was channeling Maja Ivarsson from The Sounds and Warpaint when I was writing the song and the word glitter came out of nowhere. I grew up listening to a lot of disco unwillingly whenever my dad worked out in the garage so I have a lot of subconscious 80s influences. I found a disco drum beat in Logic and that became the backbone of the song. I was listening to a lot of Robyn at the time and a person commented on her video saying she’s the only one who makes them cry on the dance floor. That was the pulse of the song, self-talk and crying on the dance floor.

While we could start arguing whether the 80s were still the disco-defining era -the 80s were all about new wave and post-punk- “Glitter on the Drum” is undeniably a gorgeous song complete with pulsating dance beats, great vocals, and superb guitar work. Without further ado, we invite you to listen to “Glitter on the Drum,” our Song Pick of the Day premiere:

Connect with Wild Heart Club on Facebook, Twitter, and Instagram and add “Glitter on the Drum” to your playlist as we are adding it to our glamglarepick playlist on Spotify: