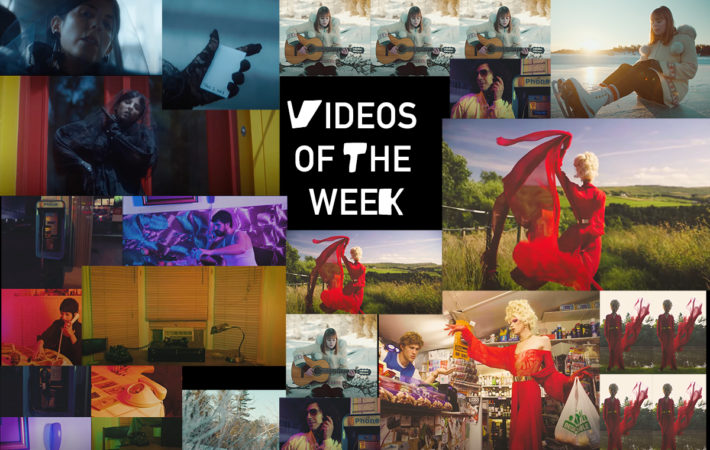 In “partner,” the song and video follow a stream of consciousness where Alexandra Levy aka Ada Lea goes through a series of late-night experiences. The song is a part of the bigger story arc of her upcoming album, “one hand on the steering wheel the other sewing a garden” (out 9/27). The moody video is directed by Erica Orofino.

Caspar Skulls singer and guitarist Melanie St-Pierre reflects on her love for creative writing in the band’s new song “Thesis.” Also, for her winter spurs creativity. We applaud the courage to release a video with snowy landscapes in the middle of August.

Hot Garbage – Sometimes I Go Down

Toronto-based psych-rockers Hot Garbage release their new single “Sometimes I Go Down” together with a video that might be a bit directed by the pandemic but its execution is super cool. Speaking about the single, guitarist/lead vocalist, Alex Carlevaris says:

It’s okay to feel down sometimes and need space. We as people have to accept that, allow that and have a healthy and realistic idea about having shitty days, feeling like shit and still loving ourselves. Also recognizing that others around us may need it and being patient with people.

This is so true. Unfortunately, there’s also a fine line where we give others ‘space’ and when we perhaps don’t insist enough. Bottom line, let’s watch out for another, treat each other with respect and empathy.

As huge fans of this Manchester eclectic synth-rock band, we recently featured “Pearl in the Palm” from their second album Vanities out October 8th. For “Gd Tym,” W. H. Lung enlisted drag artist Dylan. The band’s Joe Evans says about the video:

I romanticised about launching onto the stage in a bundle of energy and starting the party, no messing. The directness comes from making music more intuitively, and more from a place of fun. We were writing music that affirmed how much we missed dancing in sweaty rooms, enjoying the company of a collection of beautiful friendly strangers.

If you ever saw W. H. Lung live, and we, fortunately, did two years ago, you know that Joe does exactly that: launching on stage in a whirlwind of energy, getting the party started. How I miss this! Their album will be fabulous and every single/video so far has been to.

Joe continues explaining about the video, which he co-directed:

[Dylan] moves through the scenes bringing fierceness and love, fulfilling her divine task, before disappearing back into the land. I wanted the video to celebrate the central message of the song which rejoices in dancing and freedom and expression. I knew it had to be drag. We were so blessed to work with the amazing Dylan who brought such an elegance, glamour and vitality to their performance.

They shot the video’s footage in the Calder Valley, around their previous home Todmorden, North of Manchester, Joe says:

These are the real-life people and places from the period of our lives that informed the writing of this album. It’s a real joy to be able to pay homage to this these people and this scenery and here too.