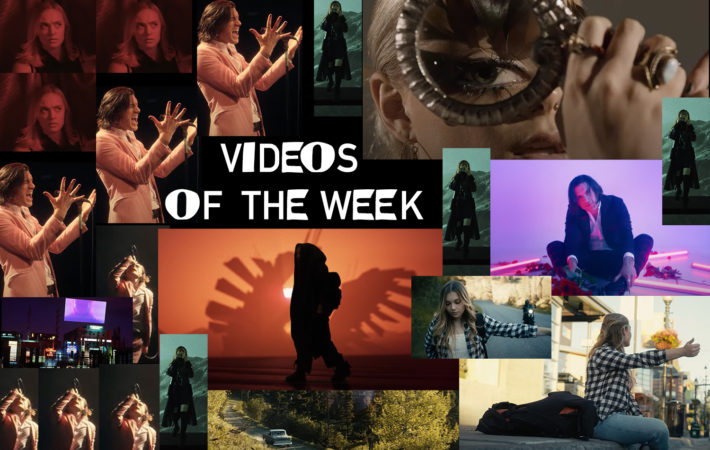 Abby Sage – Residing In The Sky

In her latest song, “Residing in the Sky,” L.A.-based singer/songwriter Abby Sage focuses on herself. The video visualizes her story with a series of dream-like sequences in which she breaks free from what looks like a dreadful party. Abby explains the title:

“I called it ‘Residing in the Sky’ because I felt light and boundless, more than the earth could cover. ‘I’m making love to my future,’ this starting line was exactly how I felt at that moment. I began prioritizing myself, adoring myself, and placing value on my future alone rather than a future with someone else.”

Hotel Mira – The Eyes On You

Is it the irresistible melody and production, or is it the bold and feel-good vibe of the visuals? We loved “The Eyes on You” by Hotel Mira from the spot! Lead vocalist Charlie Kerr says about the song and music video:

As a song, “The Eyes On You” is a bit of a bait and switch. It is supposed to sound like a love song at first listen but the more you pay attention to the words you’ll find it is actually a song about a relationship that is deteriorating. The video is a much more abstract idea. It’s much more about feeling the pressure of an audience and the pressure to perform. We also saw it as a good opportunity to start finding a symbolic way to end the Perfectionism era (by burying the pink suit jacket).

Indie alt-pop singer and songwriter Kylie Spence shares a sweet and touching video for her new single “River,” which is taken from her upcoming EP due later this year. The video, directed by Kyle Niego, shows Kylie hitchhiking through Montana, where she lives. She smiles, she’s pensive and she makes new friends while taking us along for her ride. When asked about the video’s mood, Kylie says:

For “River,” I really wanted to capture what being so desperately in love with somebody feels like, especially when the feelings are no longer mutual. Sometimes, it can feel so hopeless when you love someone so much and they don’t love you the way that you love them. I think we’ve all been there, and it sucks.

I obviously wanted to include as much of Montana as I could since this song was so heavily inspired by nature. The story follows me on a journey after getting into a fight with my partner and them leaving without me. I hitchhike my way around, and have flashbacks of the relationship throughout my journey, but start to feel like I don’t need them to be happy. Towards the end of the video, I see his truck, and all of the memories come back again, and I’m back to square one in a sense. I wanted the viewer to interpret the ending in whatever way made the most sense to them. Was I chasing him the whole time, or really trying to find myself? That’s up to you.

“Poolside” clicks in only at 1:37 minutes. Still, singer/songwriter Mindy makes it an audiovisual feast with the help of director Adrian Pruett. The video borrows iconic sci-fi imagery from many sources (which is fun to detect!) and leaves you in a state of awe.