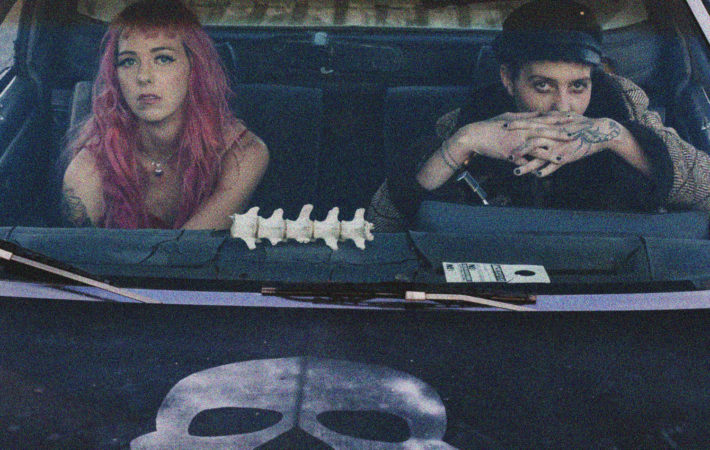 L.A. duo Foxy Panic calls their genre punk-pronic, and that fits their music perfectly. Like the original punkers of the 70s, Lena Brown and China Morbosa have a raw approach to their instruments and produce music far off from the polished and homogeneous sounds you often find in electronic pop today. Brooklyn musician Ela Minus comes to mind here as a reference. This inevitably generates dystopian vibes, which matches the lyrics of their new song “Blue Light” well. The band explains.

“‘Blue Light’ is the soundtrack to the after hours underbelly of a modern metropolis. As we have always been inspired by exploring our own urban landscapes, we decided to write from the multiple perspectives of the eclectic characters, emotions, and realities we have encountered along the way.
Each verse that China sings describes a different neon colour, illuminating one of these corresponding realities. Lena then intertwines her choruses for Foxy Panic’s signature call and response, describing the conflicting duality that exists within the late night decisions.”

Like many new bands, they were stopped in their tracks when the pandemic hit. They recall:

We were in the middle of our first US tour, opening for MIJA when the pandemic hit full frontal. It was like we were riding a wave, the amount of time between when the venue that we played the night before got shut down becoming shorter and shorter. We finally got pulled in Philly and flew back to LA with the full sense of unknown spreading across the globe.

Listen to our Song Pick of the Day, “Blue Light” below: