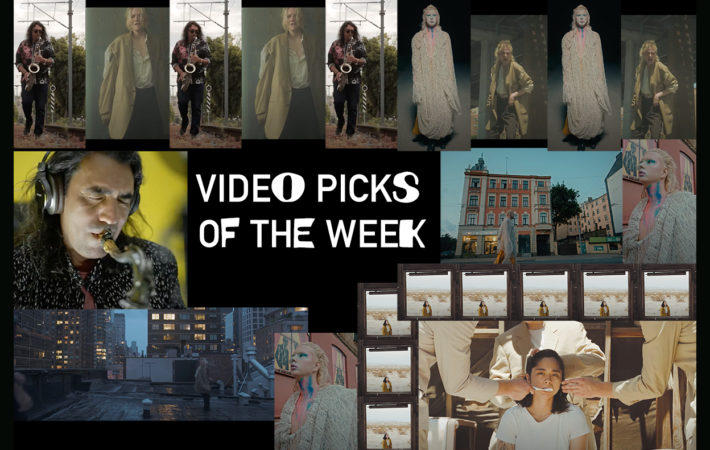 Greek jazz/lounge saxophonist Takis Drakopoulos is gearing up for his first solo project under the moniker Good Time T, and “Night Walk is the second single from his upcoming album via Ikaros Records, due in the fall 2021. In his gorgeous video, we get some atmospheric impressions of Greek street life, as well as amazing close-ups of the artist playing his instrument in all his virtuosity. We love the video and are excited for the album to come!

Gustaf is a five-piece from New York, so they don’t have to go far to find good settings for their videos. Case in point, in the video for “Book,” singer Lydia Gammill is chased around town like in a 70s action movie.

Exploring new places, and be it ‘only’ via a music video, is something very exciting, not just since the pandemic!  Dream-pop duo Hanna & Kerttu take us on  a pensive walking tour through Riga, Latvia in their new music video “No More Roads.” The sensual video is created by director Laima Graždanovič, and it addresses the fragile boundaries that must be crossed, the concept of binary oppositions: woman or man. “No More Roads” marks the fourth single from their upcoming album Unfold, which features a series of eight music videos.

Mini Trees is the project of Californian musician Lexi Vega. “Carrying On” is the latest single from her upcoming debut album “Always In Motion.” Watch how life literally happens to Lexi. Also, it is a

Lexi says about the song:

“I wrote ‘Carrying On’ in the middle of 2020 when I was out in the desert escaping the city and reflecting on the unsettling new way of life we all had to adopt during the pandemic. Despite how in some ways life had begun to feel mundane again, there was a constant underlying fear that everything could unravel at any moment. In a sarcastic tone, the song questions my ability to hold it all together. We tried to capture this sentiment with the music video, displaying a character who is being led through the motions of day-to-day life, but beginning to recognize that something isn’t quite right.”