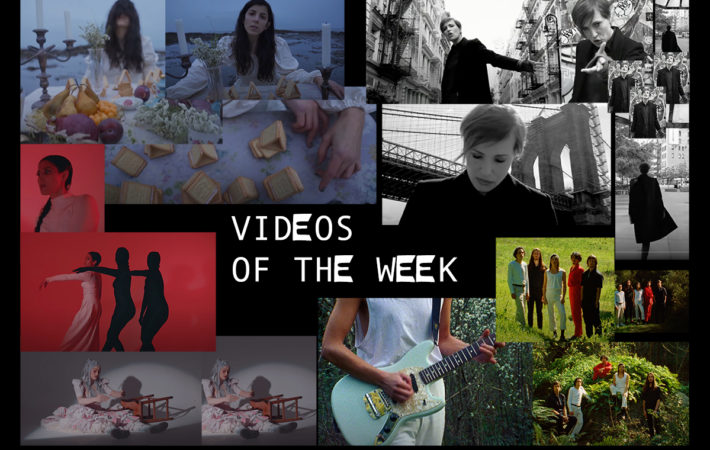 Montreal-based singer/songwriter Alexandra Levy aka Ada Lea is very clear in both lyrics and visuals of her new song “hurt.” Set in a post-apocalyptic landscape, she seems to be stuck in a wrong moment, and all she knows is that it will pass. Alexandra says:

“I wanted to find a way to communicate complicated feelings using the simplest language possible. I came with a narrative and removed almost every detail, so as not to obfuscate the feeling – but left it open in terms of a resolution: was this hurt necessarily a bad thing?”

Janita – I Forgive You

Finnish ex-pat Janita got us at ‘New York’  because as fellow transplants we also can not get enough of our chosen home city. “I Forgive You” is taken from her brilliant album Here Be Dragons, out now. The video follows Janita around town to some iconic sites, all shot in black and white, intimate and evocative.

Salt Ashes – Too Many Times

Londoner Veiga Sanchez makes dark pop music under the name Salt Ashes. In the video “Too Many Times,” she visualizes those dark childhood dreams that can haunt you for many years. She explains:

“The instrumentation of ‘Too Many Times’ reminded me of one of those musical jewelry boxes with a spinning ballerina inside, which is what inspired the doll idea for me. When I was little, I used to imagine those ballerinas had real people stuck inside of them, which got me thinking that that’s what I feel when I’m suffering from intense anxiety… like I’m trapped inside my own head and can’t get out. The reality is that it’s only me that’s trapping myself!”

The Zephyr Bones – No One

Spanish psych-rockers Zephyr Bones are back again with their jangly guitars and a funky, irresistible vibe in “No One.” The accompanying video shows the band exploring the outdoors while also jamming in between. This is a beautifully zen video, directed by Artur Tort, who explains:

We wanted to create a very rhythmic video with ecstatic and contemplative moments. We used natural landscapes, trees, and flowers, creating psychedelic dialogues with the music. We shot in film and exposed it in various frame rates to explore some of the mystical and poetic qualities that it can provide. We combined it with some portraits and screen tests of the musicians. They all have their own character and personality in the way they dress, move and express themselves, and we tried to reflect all that as much as we could.

“No One” surprises us in the same way that love does when it arrives: that instant connection, an instant match on the first listen. A feast of suggestive guitars and synths that encourages both dancing and humming to a magnetic chorus.

Zephyr Bones also announce their second album with this single/video, scheduled for fall this year and out via La Castanya.