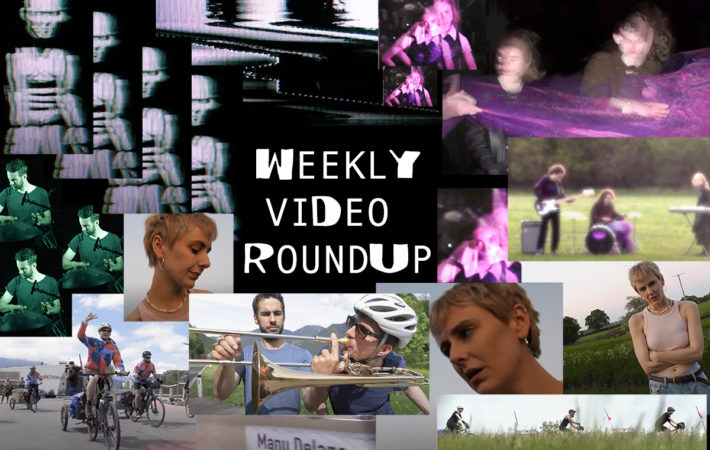 German musician Anita Goß aka ANIQO, has been releasing music over the past few years. Now she has her debut album “BIRTH” ready for a release later this year. The first single, “Must Surrender,” a dark synth-pop piece comes with a nightmarish animated video.

“Secret Plan,” the new single and video by English trio Drug Store Romeos is as secretive and mesmerizing as you’d expect from a song with that title. The track is part of the band’s upcoming debut album The World Within Our Bedroom, out June 25th, and they say about the song:

“Secret Plan” was written during the first lockdown when the only time I could write was between 2am-7am because I live with 12 very noisy people. I wanted to make a purple song so I turned off all lights apart from my colour changing bulb which I made a magenta purple. It was pitch black outside so I was totally immersed. The light guided me in the choice of tonality, and my situation and setting must have influenced the rhythm and notes. I think it turned out pretty purple.

World-renowned handpan player and composer Manu Delago got me immediately with the beautiful Alpine landscape, something I grew up with. Manu Delago and his band and crew cycled more than 1500km around Central Europe in May 2021, and played 18 concerts on their ReCycling Tour.

When asked about the motivation behind the Recycling Tour, Delago says:

The intense travels by air and bus around the world made me think how I as a musician can contribute to climate protection. This gave rise to the idea of developing an environmentally friendly counterpart to a conventional concert tour. My goal is to inspire as many people as possible, besides the music industry, to pursue a sustainable lifestyle.

Adam Pawloff, a climate expert from Greenpeace in Austria, adds:

We really welcome this project because it shows that we can all contribute to climate protection – especially in the area of mobility, where around a third of climate-damaging greenhouse gas emissions are generated. By walking short distances and increasingly using bicycles and public transport we protect our environment. But this also requires the appropriate political framework conditions.

We love everything about this! The message, the video, and the music!

U.K. duo Mumble Tide goes out on a bit of a rant here, but they wrap it in an amicable dream pop song. The video shows a blissful summer outing or maybe not. Watch for yourself!

“We’ve experienced a lot of disharmony in the past few years and at times, I’ve been pretty upset by how people have treated each other. I don’t deal well with conflict and this song is about accepting that you aren’t always going to see eye to eye with people and that it’s ok to be on different pages sometimes, like it doesn’t make you a bad person.”