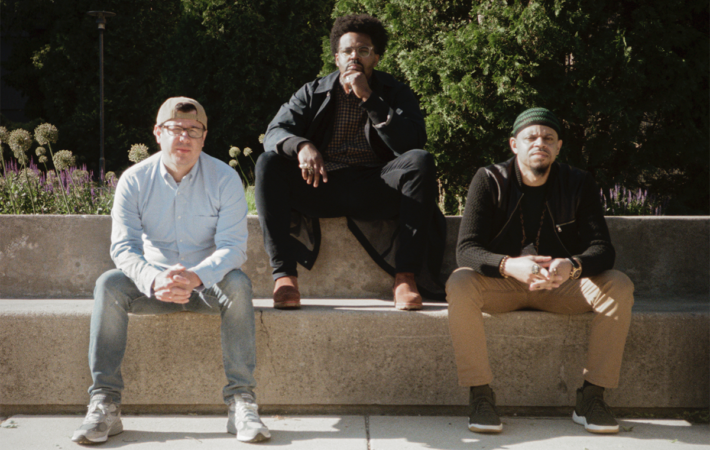 You might not hear a more soothing, hypnotic, and absolutely irresistible track this Summer than “Frozen In Time” by Chicago’s Jyroscpope.  The stunning track marks the new video and teaser for the progressive Hip-Hop trio’s upcoming EP Happy Medium, out July 23rd. Jyroscope consists of MCs I.B. Fokuz, Collasoul Structure, and DJ Seanile. They collaborated with producer Montana Macks for their newest project.

In the EP’s percussive lead single Collasoul Structure raps: “On the long road to peace baby we gettin’ all the best of it/ it’s scenic wit delicate petals/pedals and we don’t wanna step on it,” and provides the following insight:

The first 4 songs we created were seeds we planted prior to the pandemic. Those initial songs were actually going to be the full project according to I.B. and I, but Macks called me and said hey, I think something’s missing….He sent over ‘Frozen In Time’ and the moment I heard the horns on that beat I knew we had something special with that one. To me it sounds like we actually start working towards finding peace with the help of those calming horns.

I had a beat I was stashing for my next instrumental project, but thought it could round out this EP. I hit up Collasoul and pitched doing another song and he wasn’t terribly receptive to the idea. He agreed to listen to it and passed it along to I.B. Fokuz, I got a call probably 30 minutes later like, ‘say no more’ and it became the single.

The music video was shot across the city of Chicago, directed by Kory Stewart. The hazy, black and white filter adds to the track’s nostalgic, 90s feel. Watch “Frozen In Time,” our Song Pick of the Day, and stay excited for the EP to come:

Connect with Jyroscope on Facebook, Twitter, and Instagram and add “Frozen In Time” to your playlist as we are adding it to our glamglarepick playlist on Spotify, once the EP is out, July 23rd. Pre-order here.