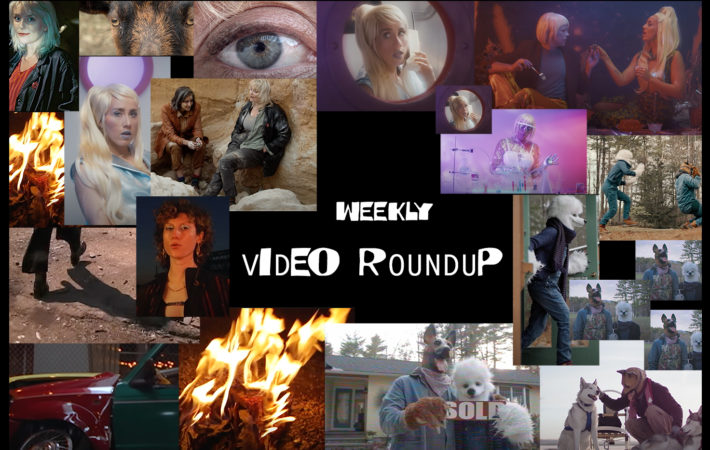 “Station to Station” is the beautifully pensive new song and video by Mega Bog. The video is at times lightly surreal but this just adds to the special appeal. Mega Bog has a new album coming out, co-produced by Big Thief’s James Krivchenia, featuring contributions from Krivchenia, Meg Duffy of Hand Habits, and many more.

When asked about the video, Erin Birgy, who makes music as Mega Bog, says:

With this video we tried to play with narratives of attachments and roles played by important people in our lives, how they morph, begin, and end in mysterious points of space, time, feeling. Attachments are inevitable, on some level, but was that person any of the things we’ve projected, why and how did we build the narrative for what is necessary for survival, and within the video, was that figure ever even there, or did they appear because of something extraordinary we found in the dust, and ate?

This is magnificent fodder for the brain and something to further contemplate. As brilliant as the music video!

Canadian musician RALPH makes dance music that is pure fun. You may want to sit still for 3:10 minutes to give this video full attention. Ralph provides us with some background about making the clip:

“The video is directed by Renee Rodenkirchen, who directed my last video for ‘Tommy’, and was inspired by one of my favorite movies Earth Girls Are Easy, Honey, I Shrunk the Kids, Gucci fashion campaigns, Britney’s ‘Oops I Did It Again’ music video, the 1960s TV show UFO, and our shared love of the absurd. I asked my long-time friend Michael Seater (you may recognize him from his iconic role in Life With Derek) to play the role of my alien lover, and his enthusiasm towards big platforms and having his skin painted purple was truly wonderful. We shot in a studio and set up four separate scenes, then shot the exterior galaxy images a week later (fun fact: the paper mache planets were crafted by my mother and installed by my dad). I’m so in awe of the hand-built sets and the amazing wigs, makeup and costumes! I had some much fun co-styling and working with the beauty team on how to achieve our desired retro/futuristic/ weirdness aesthetic. I love that everyone really went it for when we said ‘BIG, WEIRD AND BEAUTIFUL.'”

Ella Williams, aka Squirrel Flower, is on fire, but that does not stop her. “Better watch out for me,” she sings in “Flames and Flat Tires,” because she won’t give up. Her new album “Planet (i)” will be out on June 25. She says about the song:

“I wrote ‘Flames and Flat Tires’ on my second day of quarantine in Bristol, England ahead of recording. It was late August, hot, I was staying in a place that opened onto a party street, and every night I stayed up listening to the sounds of the revelers and the birds squawking and screaming until 6am, then all day watched people hanging laundry in their backyards through my kitchen window. This was one of those tunes that just falls out.”

TOLEDO – Dog Has Its Day

Even after watching it three times already, I must admit that I am not sure if I understand the video. But maybe that is also besides the point because it is pretty much very straightforward just with animals as protagonists? In any case, “Dog Has Its Day,” is not your same old we-found-some-animal-masks-in-the-attic-lets-make-a-video video. What XXXX TOLEDO together with Alex Sandman (director, cinematographer) and Ashley Plante (costume design) put together, is sweet and sentimental, as it is intriguing.

TOLEDO say about the video:

The ‘Dog Has Its Day’ video puts a literal spin on the track’s title and tells the sob story with actual dogs this time around. Our good friends Ashley Plante and Alex Sandman were able to blend the humor we frequently use in our personal lives with the inherent melancholy of the song. Working with friends always opens that door to a deeper understanding of the material. They know we are fans of stupid puns but also of through lines – if you look closely you’ll see that Randy the Dog is working on the stop motion for our ‘You Won’t’ video.