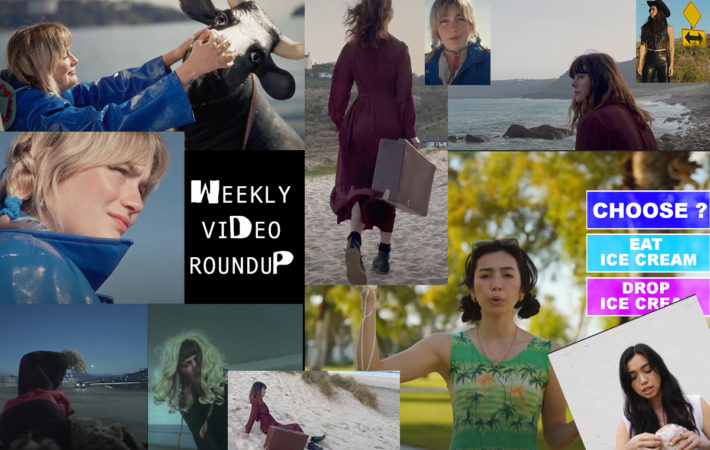 “Miracle,” the new song and video by British singer/songwriter Katy J Pearson puts you immediately under its spell. You want to know how the enchantingly quirky story unfolds and at one point you might even shed some tears. Happy tears. Well, I did. When asked about the cow-themed video shot at the English Riviera Katy says:

This video was an absolute dream to make. Joe was just such a pleasure to work with and I’m so happy he listened to my whacky ideas about cows and the coast. Was such a special time and I hope everybody enjoys it as much as I did making it. Big thanks to Muriel the cow, of course, who was the star of the show!

I’m a huge fan of Katy and her latest album Return so to direct a music video for “Miracle,” one of my favourite tracks from the record, was a dream come true. We have been planning this since last summer and think we pulled off something ridiculous yet strangely beautiful and I’m wildly proud of the results. Katy is mesmerising and her album is an extraordinary piece of art.

Little Majorette – Not Mine

Little Majorette  is the musical project of British singer/songwriter Zoe Durrant and her latest single “Not Mine,” is beautifully restraint. The track gives room to Zoe’s whispersoft vocals that can get quite powerful when needed. The accompanying video picks up on the appealingly mellow mood, showcasing Zoe in search for something on some beach but which one? We asked Zoe and she told us that the “video was filmed in the U.K. at Sennen Beach in Cornwall.”

We are very much looking forward to hearing more from Little Majorette, who has an EP coming up June 4th. Stay tuned and watch the video now:

Agnes House directed a 6:15 short film for the new single “Blood Moon” by Penelope Trappes. Penelope’s music goes deep, sonically and lyrically, and the clip is full of symbolism. She gives a hint here:

“[The short film] is a modern take on the goddess Isis if she were around to face today’s world,” explains Trappes. “Isis is the protector of women and children and the healer of the sick – but despite her powers, she would still be weighed down by societal expectations of what is expected of women.”

This is not a lucky day for L.A. singer/songwriter Wallice. Somebody just does not want to give her a break in the video for her new song “Off The Rails.” Directed by Jerry Maestas, the clip is a fun take of being followed by bad luck. Wallice says about the track:

“‘Off the Rails’ is about feeling like you don’t have any control over your life and that the world is against you – and that you’re the only one that feels that way. Sometimes there are periods in your life when it’s easy to think your life is falling apart, and there’s nothing you can do to stop it or fix it. I think sometimes it’s okay to sit in that self pity, but also at the same time you have the power to control it and take responsibility for your actions, at least to an extent. Sometimes there are just rough patches, and you have to do your best to get out of them, roll with the punches, and try not to be a shitty person.”