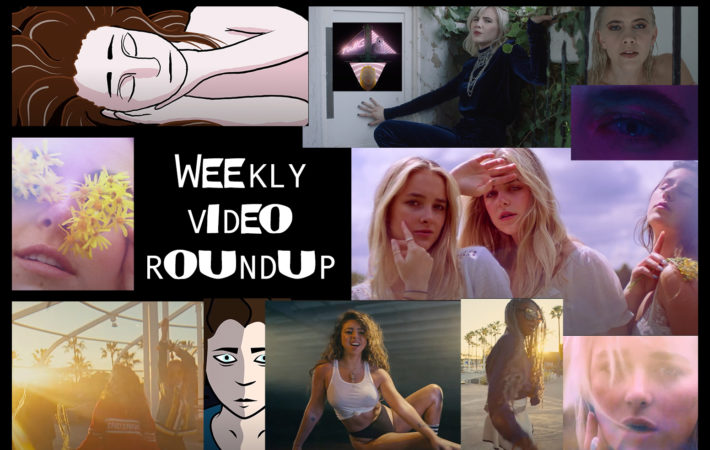 Watching the beautiful new video by Texas singer/songwriter Alex McArtor, her influences are immediately apparent. She names David Lynch as a key influence on her intricate storytelling. The visuals on “Bras and Jeans” reminded me instantly of a famous 70s movie, of Peter Weir’s “Picnic at a Hanging Rock.” Her message though, her lyrical content is much more contemporary because it serves as a piercing commentary on the media’s obsession with over-sexualizing young women- and I applaud her for tackling that!

L.A.-based singer, songwriter, and producer Claire George is about to release her debut album “The Land Beyond The Light” next Friday. The record deals with the personal experience of loss due to addiction, which follows Claire to her dreams. One of them she turned into this beautiful video for her latest single, “Northern Lights.”

“Magma” is a scorching hot song about all that is good about new love. And L.A.-based singer/songwriter Emma Negrete has a lot of fun in this video that makes you long for endless summer parties. She says about the song:

“I wrote ‘Magma’ for the passionate lovers that find themselves constantly putting out their own fires just to keep the right one burning. ‘Magma’ is an anthem for all the arsonists of love out there willing to do anything and everything to get it right.”

“Twig” marks the last single before GEISTE‘s EP Retrogrades drops later this year. Born in the south of France near the town of St Tropez, GEISTE began writing stories and her own music at a young age, and kept on creating her beautifully dark and mysterious sound.

When asked about “Twig”, GEISTE says:

It is certainly not easy for a highly creative person to find the balance, the more important is talking about it, especially in such a beautiful song and video.