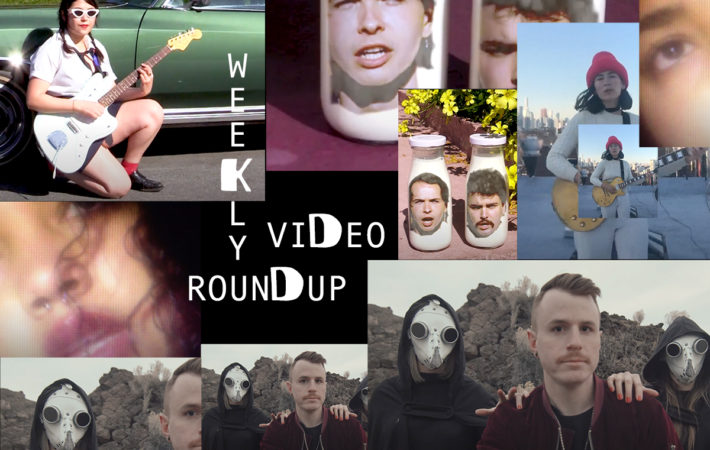 California post-punk three-piece Fake Fruit just released the compelling “Milkman” together with a truly inspired video. The clip sees singer/guitarist Hannah D’Amato in the role of the milk delivery person and guitarist Alex Post and drummer Miles MacDiarmid in diverse other roles. The music video, directed and edited by Spooky Orbison, is as sunny and edgy as the track itself.

Asked about their new single and video, D’Amato says:

“Milkman” is about noticing a relationship is far past its expiration date, and realizing that you’re the one that’s going to have to take care of it.

U.K. singer/producer feeo has a thing for twisted messages in her songs. In “end song,” she greeted the apocalypse cheerfully, she makes observations about relationships of her generations. And there is a lot to be discovered in the video too. feeo directed and created the computer graphics for the video herself. She explains:

“For the video I really wanted to explore the idea of performative physical intimacy as both an act of selfishness and selflessness. In order to perform, we must be perceived by someone else- the affirmation of self is totally tied to how others see us. I was thinking particularly about my own performance of femininity. The idea is that the video is totally self absorbed, totally revolving around me, and yet is a performance that only serves its purpose when perceived by others.”

Here at glamglare, we recently celebrated our own NYC anniversary, so “What Did the Music Sound Like” by fellow New Yorker Lea Thomas is very close to home. Let her show you all the little things and special moments that we all love about this city.

She says about the song:

“The song is an ode to the music that has offered me companionship through all the highs and lows and I wanted the video to reflect on the intimacy of that relationship, like a journal entry or a message I’d send to a friend, to share the excitement and uncertainty of change. It’s a love song to the city I’ve called home for the last 13 years.”

We can’t quite decide whether the masks in “Naked Eyes,” the new video by Reisender were inspired by the pandemic or if the band and the video’s director Zach Macias took clues from the carnival in Venice, Italy, and meshed it all with steampunk elements. Ultimately, it does not matter because the result counts. And we think the video is as stunning as it is mesmerizing. The song is lovely too, playful even despite its darker subject matter.

Paul Conroy, the band’s vocalist and primary songwriter says about the song:

The story told through the lyrics of ‘Naked Eyes’ is one of sensual melancholy; It’s the idea that humans can exist entirely online and create for themselves a brand new, synthetic existence. With this comes a darker side, defined by loneliness and anxiety. 2020 was a year that navigated more people online than ever, and it became common to know someone personally profiting from self-promotion. Whether it be Instagram influencers, Tiktok Stock forecasters, Twitch streamers, or Onlyfans creators, the marketplace of the ‘designer personality’ has come to define the younger generation.