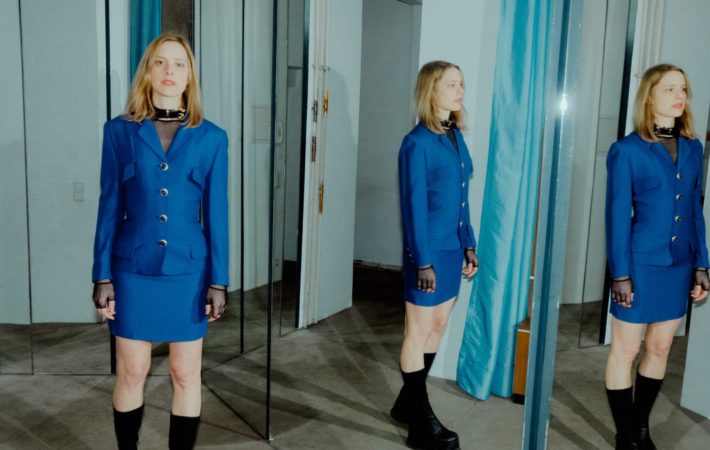 Berlin-based musician Anika (Annika Henderson) has been releasing music throughout the last decade with her band Exploded View and under her own name. Anika’s new song “Funger Pies” rides on an energetic bassline and creates an air of mystery. What is going on here? Both Anika’s explanation below and the accompanying video directed together with Sven Gutjahr leave much open to the listener’s imagination.

“A song that never had a name, like an artist that never had a face. Caught between roles, a jack of all trades, she slips between your fingers like a moment that never was, or was it? So many faces tailored to a myriad of occasions. Walls built between ourselves and the outside world. For protection. Passes grant access to another level. So where are you at? Those with all the keys, please remember, access comes with responsibility. Yet responsibility has been lost, like tissue paper in the rain, a battle without rules, to save face, exploit weakness, to save getting slayed, by the faceless generation. Welcome to the world of ‘Finger Pies.’”

“Finger Pies” is out now on Invada/Sacred Bones. “Watch the video here:

Listen to the song on your favorite streaming service or below on Bandcamp: