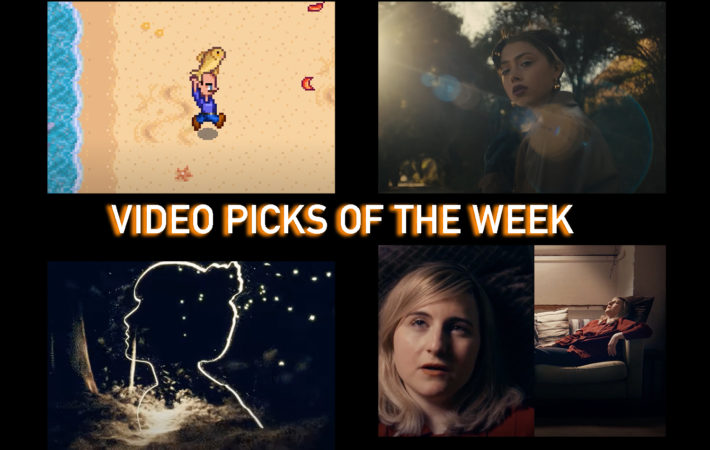 Toronto-based artist André Ethier makes us smile with the ultracharming “Wild Goldfish.” The song offers a nostalgic feel and the visuals pick up that retro vibe by putting a digitized version of Ethier as an RPG character, who lives his life on the fictional Further Up Island.

André Ethier says about his new song and the video, directed by Eva Michon:

I think this character is looking for impossible things. I don’t think there are any wild goldfish, that’s silly. And I don’t think there is a utopian feminist commune in northern BC, and even if there was, I don’t think they would have any use for this guy. Anyhoo, he represents a certain delusional attitude that is in no way malicious but is maybe sweetly pathetic. It’s how I imagine many men’s voices sound to many women.

New Jersey-native Baker Grace is a singer/songwriter who knows how to wrap her inner emotions into an easily relatable song, without using cliches or stereotypes. When she sings in the opening lines of her new single “Be Ok” I just wanna take it slow, just wanna be alone / I wanna take a breath and conquer, all of the pain that I can’t erase, we can actually feel what she means. The beautifully shot music video supports the message and the song’s vibe, and visualizes the feelings of anger and frustration perfectly but also shows us the silver lining and the shimmer of hope.

I wrote this song at a time in my life when I was both mentally and physically exhausted and I wasn’t able to see the light until I let go of my ego and saw the beauty in the little things. Now more than ever, It is so easy to get caught up in other people’s ideas of perfection but I know that success, fame, and praise are meaningless if I can’t accept and appreciate myself for who I really am.

You will not see much from English singer/songwriter Caoilfhionn Rose in the video to her new song “Fireflies,” but the visuals are mesmerizing nonetheless. We are taking on a voyage into a fantastic world created out of glittering dust. “Fireflies” is on Caoilfhionn’s upcoming album “Truly,” out on April 9.

We said it before: when singer, songwriter, and multi-instrumentalist Zoe Mead aka Wyldest releases new music, it is a good idea to pay attention. “Hollow” is the first single from her upcoming album “Monthly Friend,” out on May 28, and it comes with a lovely video.