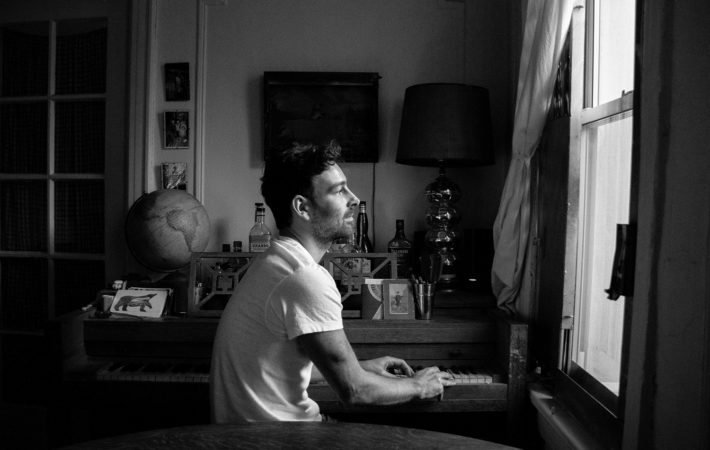 “Almost Morning,” the new single by Brooklyn-based guitarist, singer/songwriter Will Graefe starts tenderly with a promise that might be as quickly gone again as it came. But a few bars in, the instantly irresistible track intensifies, and the enchanting vocals state that it would be almost morning, a time when new things will happen again – even good things. Will Graefe’s new song is as personal as it gets, as it deals with loss and the ensuing aftermath and how to keep going.

Almost Morning is the opening track of Marine Life, but it was the last one written and recorded. It’s about processing loss and reckoning with one’s memory. It’s also a simple plea for strength, I think.

The song’s highlight, a showstopper even, is the breathtakingly exquisite guitar part. Graef explains:

The guitar solo is influenced by the sound of early Brian Eno and the unbridled spirit of Sonny Sharrock. I played and recorded all of the instruments on this recording.

“Marine Life” is scheduled for April 30th, via 11A Records and Graefe says about the recording process and its meaning:

It was an interesting challenge for me to delve into engineering fully while also keeping the focus on the songs. I’m used to being a collaborator and greatly value that dialogue. But it became a reality that it was the only way this album was going to happen. And I really just had to do it to feel okay. It’s the way I had to cut through a bunch of things in my life that felt cathartic and self-directed.

The result is nothing short but stunning! Pre-order the album to treat yourself to something extraordinary because Will Graefe not only is an excellent guitarist who knows his instrument really well but proves with “Marine Life” that he is a songwriter one should follow closely. Listen to “Almost Morning,” our gorgeous Song Pick of the Day:

Connect with Will Graefe on Instagram and add “Almost Morning” to your playlist as we are adding it to our glamglarepick playlist on Spotify: