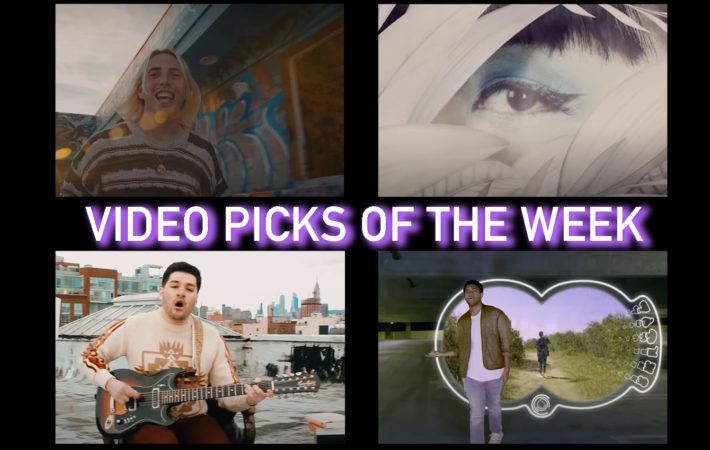 “Light Me Up” is a breakup song. But Tyson Evans, aka Crooked Teeth, doesn’t come over as whiny; he instead sounds defiant and energetic. The video is beautifully filmed in the desert and not only features a hot drum solo, but also one of our favorite West Coast musicians, talker.

Tyson says about the song:

“One thing I was feeling a lot was this weird sense of gaslighting – saying that things didn’t happen in the way that they did or things that are blatantly not factual or invalidating my emotions over it… I felt used out of all of it, like when you bum a cigarette off somebody – maybe you don’t even really smoke, but you bum a cigarette off someone to kill time… I was the cigarette that got bummed and then put out.”

Fifi Rong – Another Me

London-based singer, songwriter, and producer Fifi Rong s back an ethereal new song “Another Me.”

Speaking of the concept behind the single and video, Fifi Rong says:

In any doomed romance, timing is always mysteriously wrong. This is my first full CGI music video and it visually portrays the elusive nature of the character surrounding the key message: ‘you won’t find another me’. The undertone of the song displays a sense of pride and confidence in the character’s melancholy. Dressed in nothing but petals, I wanted my character to symbolise purity, nature, truthfulness, vulnerability and the divine feminine form. Acting as a rotating statue, I wanted to mark the passing of time and seasons as if a unique and lonely piece of art on display.

The video, directed by Rok Pat, is pure beauty. Enjoy!

“Monologue” is a lovely song, with a charming video that showcases Queens-native singer/songwriter/producer Griffin Novie. In the Brendan McKnight directed music video, we see Novie waking up on a Brooklyn (or is it Queens?) rooftop with Manhattan serving as an inviting backdrop. These rooftop segments are broken up by studio sessions with Novie demonstrating his musical talent as a multi-instrumentalist.

The joy and lust for life in “Pine” by Unusual Demont is infectious, and that is definitely the good kind of contagion. The lush video is directed by  Nicole Blue who makes us follow Unusual Demont through different places, always searching for something. Along the way, we can enjoy some smooth moves by Unusual Demont’s all while being wrapped in his utterly gorgeous vocals. Blissful!