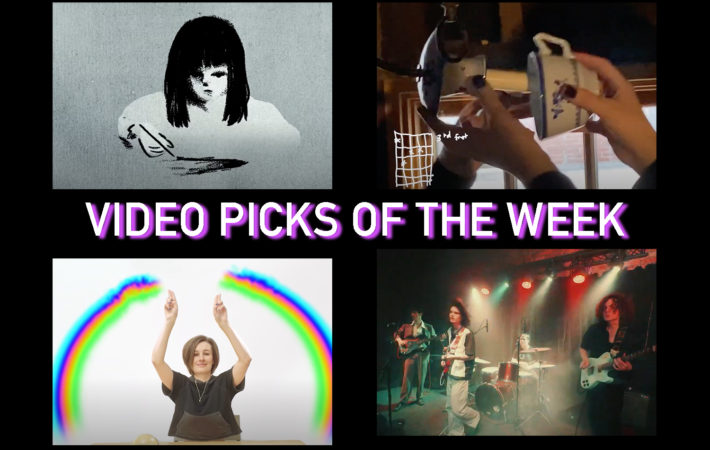 Kero Kero Bonito – The Princess and the Clock

British trio Kero Kero Bonito has a heartwarming fairy tale for you, a feast for both your eyes and ears. The upbeat electro-pop perfectly fits the beautifully painted animated video. “The Princess and the Clock” is on Kero Kero Bonito’s upcoming EP “Civilization II,” out on April 21.

“Ballroom Dance Scene”, the new video by Chicago three-piece Horsegirl delights with its slightly different and novel take on what makes for a cool music video. Penelope Lowenstein, Nora Cheng, and Gigi Reece keep things a bit more mysterious but not where the music itself is concerned. They do offer handwritten guitar chords and melody lines as an alternative to providing lyrics. This makes for an utterly charming music video.

L.A. trio Slothrust is back with a new song, “Cranium.” Wait until about half of the video when Leah Wellbaum launches into a hot guitar solo. It is best to let herself explain what she is doing in the first half:

I think of ‘Cranium’ as an absurd mating ritual dance by one of those beautiful complex birds with iridescent tail feathers. Except instead of feathers, I am holding family heirloom tweezers and my hands are coated in honey. It’s sweet, but incredibly uncomfortable and definitely overbearing.

She continues to describe the song saying:

The song is about wanting to serve love but not knowing the ‘right’ way to do so— often offering too much, or something unwanted entirely. It is a promise to love both absurdly and impossibly with a heavy sprinkle of pain.

With not having seen any band live in what will soon be one year to the day, the desire to experience great music live becomes almost overwhelming. British indie-rockers The Lounge Society capture that live spirit beautifully with their new single and music video “Cain’s Heresy.” The video for “Cain’s Heresy” was filmed at the iconic Hebden Bridge Trades Club, and is an homage to The Strokes’ “The Modern Age” video, which incidentally turns 20 years old this month, and features a cameo from The Strokes’ producer Gordon Raphael. With it, they are also announcing their debut EP “Silk For The Starving” out on 6/18 via Speedy Wunderground.

When asked about the single, The Lounge Society says:

Cain’s Heresy is a portrait of the world we’re headed to – where consumers lie sedated while ‘This Week’s Hot Trend’ and ‘101 Style Tips For Summer’ are forced down their throats by gloved hands. It’s our way of saying ‘not on my watch’. Cain and Abel were brothers at war, and this song is our last stand in the war on culture which is being waged by corporations at the moment. Musically the song isn’t designed to fu*k about – we could’ve filled it with 7th chords and synths and bleeps and bloops but we wanted it to be raw and honest, and we think it sounds all the better for it.