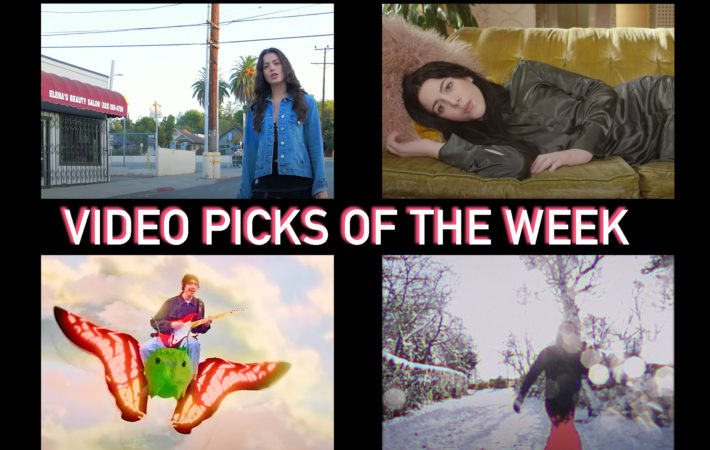 Join Alicia Blue on a walk through her sunny hometown L.A. The topic of her new song, “Blackbird,” is far more solemn than the visuals suggest. Alicia says:

“Sometimes when you’re pressed so thin, crushed so flat that there’s no ‘You’ left, you can’t speak of the trauma. The unfathomable pain, too big, too vast to allocate energy towards, because your number one focus is, of course, to survive. To give an ounce of energy to this pain would surely annihilate you. An obstacle course race to the finish line; one misstep and you’re out.”

Luna Shadows released a brilliant new album “Digital Pacific” (Spotify | Apple Music) last week together with a video for the song “trash tv,” about the dark side of California that increasingly becomes visible. She says:

“I feel conflicted glamorizing a city that is the place of so much suffering for so many. My more cynical side sometimes doubts that our posts, petitions, and pleas result in permanent change. I often feel powerless – I don’t know what to do beyond a retweet some days. I aim to be a force of positive change, but I sometimes accidentally substitute meaningful action with mindless activity. ‘trash tv’ is an admission of that failure but a hope to do better.”

Decidedly lo-fi, and all the more charming is “Denial,” the new single by Los Angeles-based indie-rockers MILLY. But wait, until you see the visuals for “Denial,” something to make you smile and fall in a bit of a pensive mood. Frontman Brendan Dyer explains:

“Denial” is about the idea of being fixated on something but knowing deep down it’s gone. I was living in NY at the time I wrote it and was going back and forth between there and Connecticut. I was really trying to capture the feeling of being alone and why it was hard for me to digest how that felt. My hometown spots feeling different after leaving, people moving on with their lives, etc.

We loved “Hear not Say” from the spot and were curious about the video. As a sign of the times, many videos these days are very lo-fi either out of necessity or decidedly so. Maybe a little bit of both in Western Column‘s case? Christopher Devine, the artist behind the moniker has enlisted the help of his friend Aodhan Gallagher and created a surprisingly appealing music clip, which demonstrates that DIY doesn’t have to be boring but can be really cool.

We got all the shots in a day and I edited it that night and tried to go for something that emulated the artwork. Similar to the track itself, the video has been a fun challenge and more than anything has just been a really good learning experience. It makes me really excited about the stuff I’m working on now.