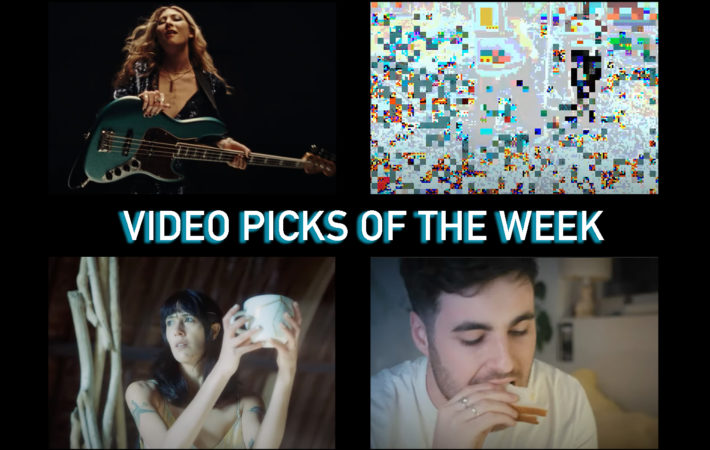 New York singer/songwriter and bass player Blu DeTiger makes us await her debut album “How Did We Get Here” even more with a music video like “Vintage.” She says about the visuals and the story for “Vintage”:

I sing about needing a ‘vintage boy’ – not to take me out on the town or to make me feel special – but to be an accessory to my sick outfit. Usually, the perspective is from the guy, who has a girlfriend as his arm candy. In my version, the girl is still the main character. The song is meant to empower, along with highlight the characters that I often run into in New York City.

Ha! We have run into men like these often too and it is wonderful to see a glimpse of our city which we have not seen in too long because… We all know why.  Not to mention a real live show. All the more reason to indulge in Blu DeTiger’s cool video!

You usually don’t want to see what happens in the new video by London band Dry Cleaning: digital pixelation that typically indicates technical glitches. But as the video progresses, the effect becomes quite mesmerizing, especially with singer Florence Shaw’s deadpan narration.

After her incredible album “The Caretaker” that came out last year, Nandi Rose aka Half Waif has some new music for you. Her new song “Orange Blossom” comes with an artfully filmed video rich with symbolism.
Watch the video now:

Long-distance relationships were a thing already before the pandemic hit but now, they became more common. Filmed in Bristol, “Three Weeks” is a light-hearted take on the frustration of being in a relationship where the partner is not close. James Humphrys enlisted long time friend Jessie Mei Li to play with him in the clip and co-direct it too. James Humphrys says about the song:

Let’s be real, lockdown has been bloody tough for us all – particularly those living far away from loved ones. For me, much of the time I tried not to think about how rubbish it felt to feel so distant and disconnected, and for the most part I managed fine and tried to focus on the fact that this would not be forever – but ultimately, sometimes those thoughts felt pretty overwhelming. This song is me being honest about the situation.

When asked about his experience working together with his long time friend, Humphrys explains:

I’ve known Jessie since my time as a student in Bristol. She has always said she likes my music and so one night out at the pub I asked her if she would like to feature in the video for my latest single. She said yes and as things turned out she did a lot more than just feature in it. She basically thought up the concept and directed the whole thing. Performing alongside such a talented actor certainly took me out of my comfort zone but I learnt a lot and I’m really proud of what we managed to achieve together.

And fans of the “Shadow and Bone” trilogy will be delighted to hear that Jessie Mei Li will play the role of “Alina” in the upcoming Netflix series.