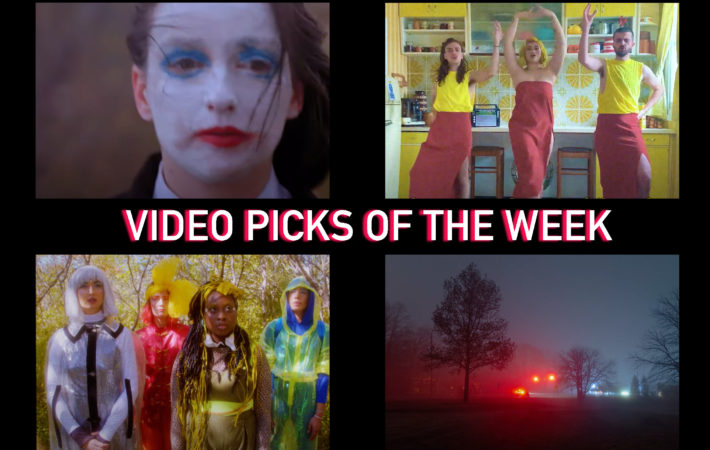 Montreal-based singer/songwriter Julia Kennific aka Favourite Daughter is out for a run. Wait for the moment when she starts painting her face without slowing down (don’t try this at home!). There is a lot more going on in this dynamic video, which is surely worth three minutes of your time.

London-based indie-pop trio Galactic Dust did not get us at “pizza” per se but we got hooked once we came across the joyful dance scene in the charming music video. The music clip for “The Pizza Song” is more than just some pleasing visuals about generally loved fast food. Actually, it is a trifecta of accomplishments: “it is a playful and skilfully written allegorical track that cleverly and lightheartedly tackles themes of body image, female empowerment, and sex.” The band filmed and edited the video themselves. Extra kudos.

We love the inspiring cheerfulness of the song and its dazzling visuals!

The 70s French TV show “Les Gammas! Les Gammas” is probably too obscure of a reference to have served as an inspiration for New York band Kalbells. But they nail a similar retro-scifi vibe perfectly almost 50 years later when they go on a trip to earth in their new video. A new album “Max Heart” is scheduled for March 26.

Watch the video “Purplepink” here and wait for that spaced-out guitar solo:

It’s been a bit quiet around chillwave pioneers Small Black but the Brooklyn-based four-piece is gearing up to release their first new album in five years. The album is titled “Cheap Dreams,” and scheduled for April 9th via their new label 100% Electronica. To accompany the album announcement, Small Black release the compelling new video “Duplex,” directed by Ryan Draybuck. It is quite hypnotic in its portrayal of urban loneliness and small-town parking lot isolation.