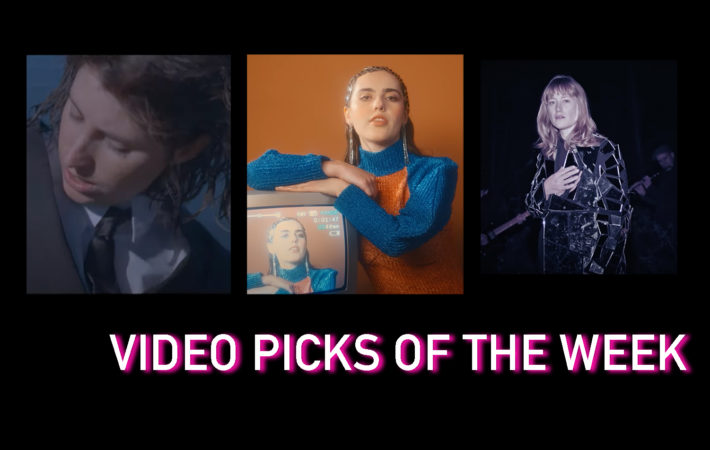 A lot is going on in the new video by L.A. singer/songwriter Jillian Medford aka IAN SWEET. Are those people in suits really fighting or just playing. And who are they anyway? Maybe Jillian’s words give you a clue about her self-directed video:

“[The Track] taps into my own twisted logic to try and break away from obsessive thought patterns,” Medford explains. “It turned into a pop anthem of seemingly silly ways to try and forget someone, like saying their name backwards, but I feel these devices contributed to my healing.”

For her debut album “What I Never Told You” London-based singer/songwriter Odina filmed a batch of pretty videos. “Hey Hey” is the latest one showing her in different scenes with curious accessories, like retro-tech.

The Weather Station released a magnificent video to their intense and utterly compelling single “Atlantic.” Both, video and single, come ahead of their highly anticipated album “Ignorance,” out on February 5th via Fat Possum.

The Weather Station is the musical project of Tamara Lindeman and she provides some amazing context and insight about “Atlantic.” She says:

Trying to capture something of the slipping feeling I think we all feel, the feeling of dread, even in beautiful moments, even when you’re a little drunk on a sea cliff watching the sun go down while seabirds fly around you; that slipping feeling is still there, that feeling of dread, of knowing that everything you see is in peril. feel like I spend half my life working on trying to stay positive. My whole generation does. But if you spend any time at all reading about the climate situation circa now, positivity and lightness are not fully available to you anymore; you have to find new ways to exist and to see, even just to watch the sunset. I tried to make the band just go crazy on this one, and they did. This is one where the music really makes me see the place in my mind; the flute and the guitar chasing each other, wheeling around like birds, the drums cliff like in their straightness; I love the band on this one.

We loved the track and the visuals from the spot, and we also think that Lindemann’s vision came beautifully to live. Seeing Lindemann moving in front of the camera, around her band members, the members and the camera moving with her, all the while her fantastic suit made up of several dozens of big (!) mirror pieces shimmering… genius! We can not get enough of this!