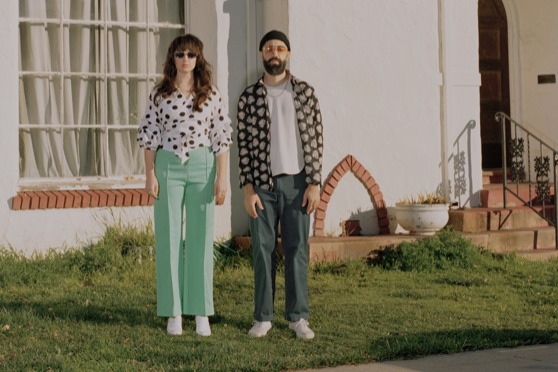 Brijean Murphy and Doug Stuart teamed up to make music together under the moniker Brijean. Ahead of their upcoming full-length album “Feelings,” they share the new single and video “Ocean”. The album will be out on February 26th via Ghostly International. The new track is as beautiful and compelling as one would expect from a song titled “Ocean.” One can sense the sunlight dancing on the water’s surface, complete with seagulls diving for sustenance and waves relentlessly swashing ashore. Like a much-needed mini-vacay, recharging in less than five minutes!

Various methods of video feedback and modular video synthesis were utilized to manipulate the footage captured by Brijean and Doug. We decided on a black and white treatment of the footage, contrasting with selective coloring and unusually cropping of the clips to evoke a dreamlike sequence, bringing the ocean to the desert.

In 2018, Murphy and Stuart began collaborating. Both are known in the close-knit Oakland music scene and share a common background in jazz, Latin, and soul music. Murphy is also the high-in-demand percussionist for acts like Poolside, Toro Y Moi, or U.S. Girl.

The duo’s first sessions resulted in the mini-album Walkie Talkie (released in 2019 on Native Cat Recordings). They continued to collaborate with other Oakland-based musicians, inviting friends Chaz Bear, Tony Peppers, and Hamir Atwal over, and they all ended up contributing to the album.

Murphy says about these collaborating times:

We improvised on different feels for hours. Nothing quite developed at first but we had seeds. We re-opened the sessions a couple months later, after returning from tours, and spent a month developing the songs in a little 400 square foot cottage.

We can not wait for the album to drop! For now, watch the video for “Ocean,” and indulge in our Song Pick of the Day: