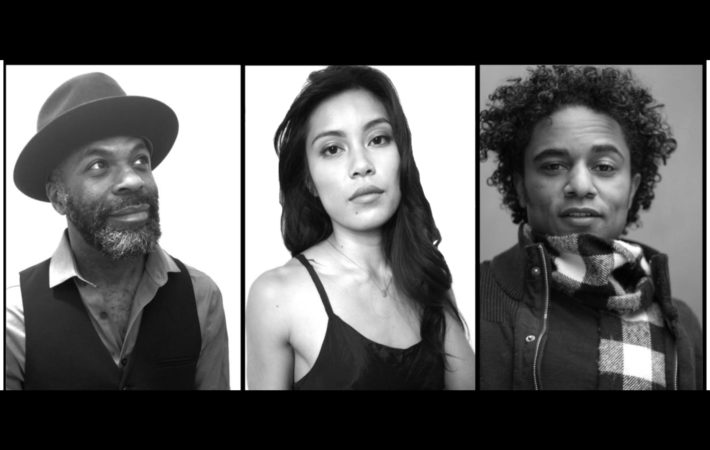 The past year saw many artists do things differently. As we all learned to not only remain six feet apart from each other but to stay at home entirely, some artists took this as a challenge to collaborate more than ever. While we had featured Bryan Edwards’ and Kelsey Warren’s Juneteenth Mixtape, last year, we are excited to shed some light onto Kelsey’s newest project, the bi-coastal 33 1/3. Kelsey Warren of indie-rock band Blak Emoj is based in New York City. The other two members of 33 1/3 are Saf Ro, whom we became fans of thanks to the Juneteeth Mixtape, and Gabby Buko aka Gnoia, who both call Los Angeles their home.

Yesterday, they released their first single “Timedown,” an instantly appealing track that brims with understated cool. The heavy basslines and intriguing rhythms contrast beautifully with Gabby’s bright and enchanting vocals. This is music to play on repeat!

We asked Kelsey how this project started, and he told us:

Saf Ro and I’ve been friends for a long time and always wanted to collaborate on a project. But it wasn’t until quarantine 2020 when we started to seriously put songs together pitching for other artists. So we figured, now’s the time to finally put out our own collab. I had a ton of ideas and tracks I’d send to him. He would rearrange and add these cool things, and we’d both write back and forth that way. It sounded cool but I felt it needed something else, but not one of our voices singing. I suggested maybe having another person to handle vocals, writing lyrics etc… Saf Ro brought Gnoia into the mix who is excellent. She was the missing puzzle piece. And here we are.

Change in pace and outlook can have the most exciting outcomes. “Timedown” is such a fantastic song, and we also asked Gabby to tell us about her side of the creative process. She says:

“Timedown” to me represents the initiation into the hero’s journey, both literally in content and symbolically in the collaboration of the group. When Saf Ro showed me the songs, I was drawn in by something I couldn’t quite put my finger on but knew I wanted to be part of. I felt the terrified, anticipatory feeling that comes with venturing into the unknown, which inspired a lot of the writing. This allowed me to be free when writing (less thinking and more knowing) and when I was feeling stuck, Saf Ro helped to coax out the authentic elements through late night pep talks.

Listen to “Timedown,” our Song Pick of the Day:

Connect with 33 1/3 on Instagram, and add “Timedown” to your playlist as we are adding it to our glamglarepick playlist on Spotify: