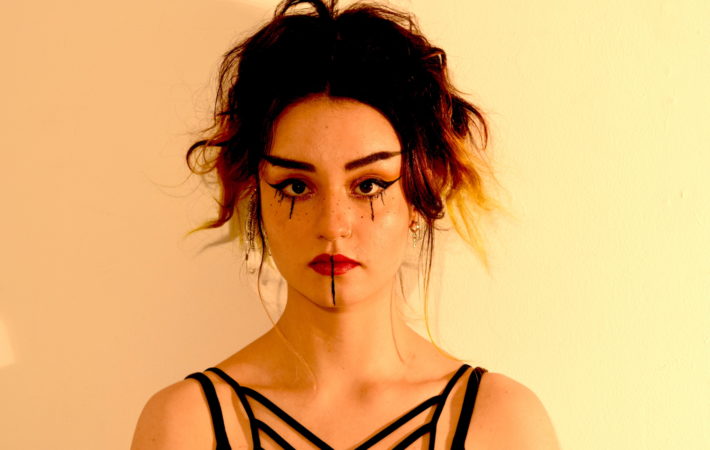 We are super excited about this one! We’re following Dharma Ramirez for five years since she was the singer and guitarist of the Vermont band The Snaz. We met the band first at SXSW 2015 when they played the backroom of a raunchy Sixth Street bar on the same makeshift stage as the by now Grammy-nominated rock trio Highly Suspect. Dharma’s abundant talent as a singer and songwriter was obvious and fortunately she continued to do music after The Snaz broke up. Her first release “90s Baby” is a funky indie pop track about her L.A. experience that showcases Dharma’s irresistible silvery vocals.

Dharma tells us about the song:

90s Baby is a song I wrote while living in LA. I’m from Brattleboro, VT. But I was intrigued by the idea of LA. It represented something totally different. At the time, I was in a two-piece punk band and, we drove cross-country together to resettle in a studio apartment in Arcadia, California. It was a shock. I hadn’t fully prepared myself for the brightness of LA. This song is the culmination of that time in the sun. I wanted to find a place in pop culture as an artist and a person. I wrote this song intending to write a cliche pop song, inspired by the unavoidable radio hits blasting in LA traffic.

However, if you look past the catchy glitz, there’s this sense of distrust, mania, and jealousy that comes through. At the time, the picture I painted was imaginary, but now, I think of this song as a conversation with my alter ego. Here, I’m a product of my time and personal insecurities. This song goes high and low. Part of why this song is being released two years after the fact; is because upon returning to VT, I realized how much growing I had to do. When I wrote this song, I was so confused but desperate and hungering for potential. So I guess it’s an egoic manic episode that’s kinda fun, kinda weird.

Listen to the song below: