BYFYN answers questions about her new EP “In Blue With You” 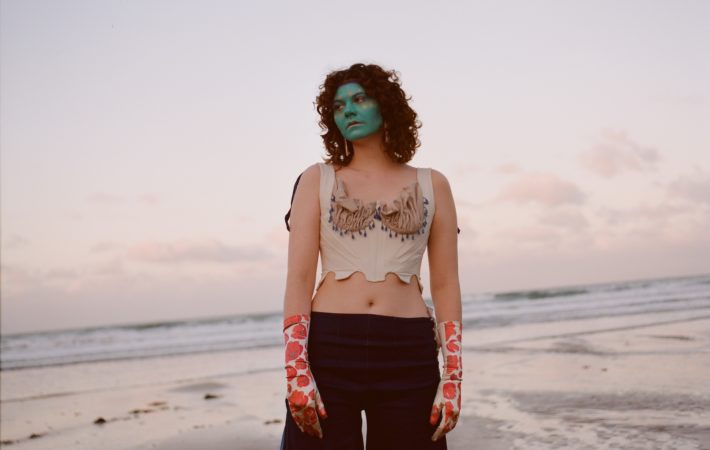 BYFYN answers questions about her new EP “In Blue With You”

Ellie Isherwood aka BYFYN is a singer, songwriter, and producer from the U.K. and she has just released her new EP “In Blue With You,” a collection of four shimmering pop tracks that all show a particular edge that keeps them apart from much of the other contemporary pop music. Certainly, the fact that Ellie has full creative control over her music and that she is deeply engaged in designing the sounds for her songs has something to do with it. We were curious and thankfully she has agreed to respond to a few questions. Listen to the EP on Apple Music, Spotify, or on SoundCloud below and read on:

Was there a specific event or a particular person in your life who inspired you to write music?
When I got to the age of about 15, my family bought an Apple desktop computer and I immediately got obsessed with writing and recording songs on Garageband (most of which were dreadful haha). But I just loved that even though I couldn’t really play any instruments very well, I could use all these software instruments and create what I couldn’t have dreamt of being able to play in real life, it was amazing. But my main source of inspiration for writing the music that I do now were my uni friends. I studied Drama and Theatre Arts at Goldsmiths University of London, but I lived with loads of Popular Music and Music Computing students. They inspired me so much, just hearing the incredible tracks they were creating all by themselves in their bedrooms on programmes like Ableton, I was blown away and they gave me the confidence (and let me borrow their equipment) to give it a go a proper go myself.

Going back in time, if you played your just-released EP “In Blue With You” back then, would you have liked it?
I would like to think I would!! I am so proud of the EP and how far I have come in the last couple of years with my songwriting and production skills, I hope that 15/20 year old me would be impressed haha.

There are many ways to approach electronic music. Where do you start, what is for you the first spark for a new song?
It really varies! With this EP, a lot of the melodies popped into my head at random times, like little fragments and I hurriedly grabbed my phone to record my singing it before it escaped me! They served as the first spark for the tracks “Ain’t Gonna Be Lonely” and “I Love Me Too”, and then I’d take those little fragments and produce around them until I found the song. But with the other two tracks, I was just fiddling around with different synth sounds and they spilled out from there. I always love to get a new synth or VST (finances permitting) before starting a new project because having new sounds to explore serve as such huge inspiration to me.

Do you have an idea of the final arrangement from the start or does your music take its own life?
Again it varies, with some songs I can have a melody just pop into my head and I’ll record it on my phone and then from that I’ll literally write the whole song over several voice notes and I’ll know exactly where it needs to go before even stepping foot in my studio. But then with other songs the arrangement will come literally as I’m producing, which is what happened with the majority of the tracks on this EP. I’ll throw all the instrumentation and layers into an Ableton file, I’ll just keep recording, layering and looping. Basically, I have a solo jam session and then play around with the edited version of that for a while using my Push controller and then usually, I’ll record that into the arrangement mode and get into the proper producing from there.

You produce your songs yourself. Do you have any encouraging words for other musicians to take the step of self-producing, rather than giving away creative control to a hired producer?
I think it’s never been so easy to produce your own music than it is now! All you need is a laptop, I mean that is a big expense in itself, but you don’t need a big fancy studio or masses of expensive hardware. There is no right or wrong way to produce your own music because it’s yours – heck it can sound however you want it to and if you do it by yourself there is no pressure or judgment! So I just say, go for it, have fun and let your ears take you where you need to go.

We have made it almost to the end of 2020. How did the experience of this year influence your songwriting for “In Blue With You”?
I had just finished the writing part of the EP in March as the first Lockdown started in the UK. So the year’s increasingly anxiety inducing events had only just begun. Listening to the EP now, it has a whole other layer to it due to the experiences of this year; the loneliness of self-isolation, the pressure cooker of isolating with other people, the uncertainty of everything! The issues that I was dealing with at the time of writing, before this crazy year had really begun; anxiety and the impact of my mental health on my relationship, seem all the more relevant and (unfortunately) much more widely relatable for people now post 2020’s events.

Your bio includes involvement with the “Rising Sun Arts Collective”. Could you tell us more about this? How did it help your growth as an artist?
So back in 2016 myself and 8 other creatives moved into this old and rather run down pub in South East London after graduating from Goldsmiths. Together we formed the Rising Sun Collective. We put all of our music equipment together and created a studio in the basement as well as a venue for parties and gigs. It was an incredible time for me, this is where BYFYN was truly born, it’s where I recorded and produced my first 2 EPs. I was so inspired by all the amazing musicians and artists that I was living with and collaborating with. Everyone was just creating constantly and sharing what they were working on. The door was always open, having different bands rehearsing in the living room and recording in the basement, putting crazy parties on every weekend, it was pretty mad, but brilliant. Living in RS and being a part of that collective really gave me the confidence to really pursue music. Everyone really believed in each other, we felt like together we were doing something special. I’m writing in the past tense because I don’t live at the pub anymore, but RS collective is still going strong!

If you could escape the here and now, what decade would you go to for its style, art, and music?
Ooh this is a tough one because I feel an affinity to so many different eras. But if I had to choose I think it would be the 90s, I think I’d fit in really well with the post-punk, Cocteau Twins worshipping crowd. I’d also have loved to be there during the height of the Britpop era, looking back it just seems like it was such a vibrant and playful time for music, art and style. Obviously I would have been team Blur…

Thank you, Ellie! We recently talked about 90s music and were definitely all in with Britpop.