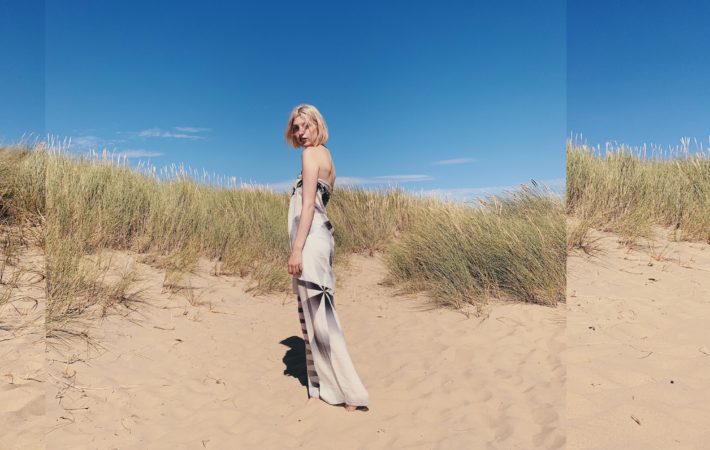 For Lee Tatlock aka Cream With A K the visuals for a song are as important as the music. For her latest song “One More Round,” released this summer, we had to wait a few months for the accompanying video. But that is to even a better effect: when everybody (in the northern hemisphere) starts thinking about snow, long nights and bundling up, Lee takes us back to the carefreeness of hanging at the beach.

She was so kind to give us some background about the song and making of the video:

This is my second self made music video that I made this summer during lockdown in the UK (As the Director, DOP and editor!)
The location I picked to shoot was Camber Sands in Rye with the idea to shoot the Music Video in the 60s Nouvelle Vague French Cinema Style.

In making this video, I found my process for making visuals for “Cream with a K” mirror the creative process I use in making the music. I only go in with an emotion I want to capture embracing the limitations I have during lockdown, which force me to make experimental choices and push myself beyond boundaries of a “safe DIY video”.

My workflow is a lot more creative and intuitive – focusing just on the task at hand and knowing I’ll figure out how to cross the next bridge when I get to it.

This song is about being defeated over and over again but relentlessly getting up and trying again. Although, it’s a love song and could sound like a “typical victim of love” story, when I paired it with the video, I realized that it wasn’t about being a victim at all. It was about making your own life’s decision and fighting for them no matter how badly you get beaten up and never giving up on yourself.

Watch the video “One More Round” here: