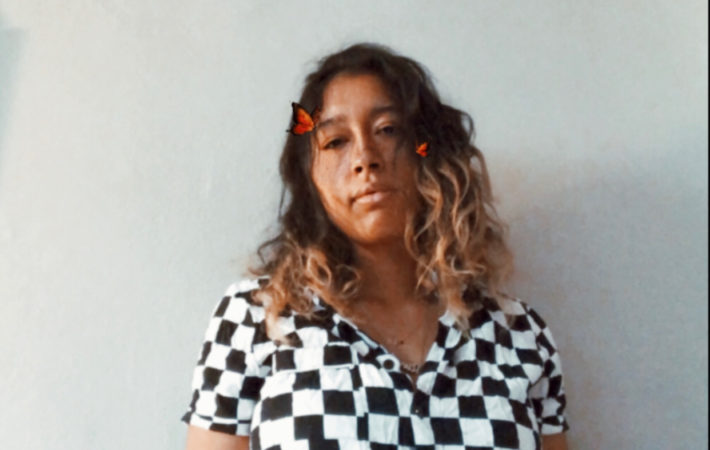 Music is a collaborative art form, but here at glamglare, we have a special appreciation for artists who keep complete control over their songs. Even more so when it comes to electronic pop music, with its blurry line between songwriting and production, where songs can sometimes feel disjointed. Today, we are happy to feature New York-based singer, songwriter, and producer River Hooks, a musician who can do it all. Listen to River’s latest single “Mountains” below, then read on about her inspirations, her creative process, and her big plans for the future.

Can you remember the first song or artist that inspired you to make music yourself? At which time in your life did this happen?

I think I was watching The White Stripes play on Jools Holland’s show. I saw Jack White playing guitar and was like this is what I want to do. I also remember watching another live set where he was playing both his guitar and piano at the same time! I’ve always been captivated by his performances and I was pretty young when I saw the Jools Holland set. After googling when that episode ran, I found out that it aired in 2001, so I was really young. haha

However, Kanye West was definitely the reason for me putting out my first single on Spotify in 2018. He had just released his project YE and I played it too many times when it came out! His music is for him, whether people love it or hate it and I’ve always loved that about him. 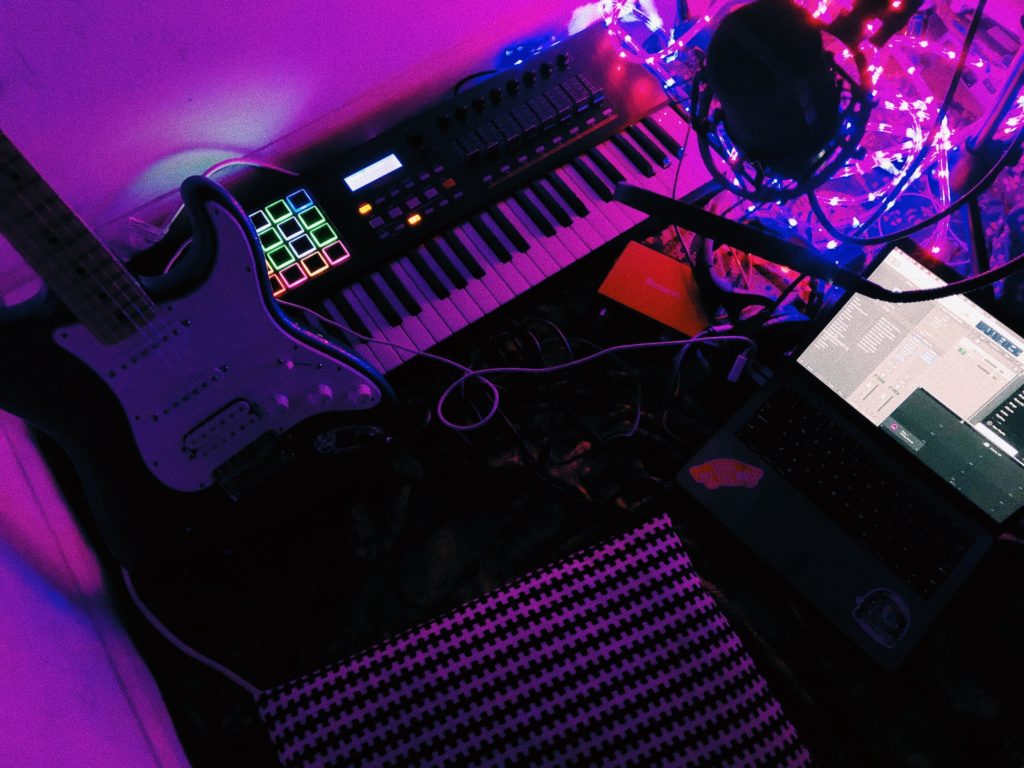 You produce your songs yourself. Can you talk about how a song comes together for you? Where do you start and what are the finishing touches?

How I produce a track is different every time. Yet, I love taking hot showers and creating late at night. Some of my best work happens after midnight. Those are typical environments where ideas pop in my head. A lot of my songs start off as voice memos/written notes on my iphone, so that I have a bunch of random thoughts, melodies or lyrics that I can go back to when I want to write a song.

I usually start off with creating the production on my acoustic guitar. Sometimes I’ll start off by playing piano, but I usually jam on my guitar more often. The starting instrument may not translate into my DAW, Logic Pro X, but it gives me a rough idea for what the mood may be. Once my ideas reach Logic, it’s then all about my mood and that bleeds into the full production. I also always work with colored LED lights on, that helps put my head into a creative space. I’ve got a lot of fun VST’s and plugins, so I like playing around with those, especially my Sound Toys bundle. I try to throw in a lot of ear candy into the mix, so that’s usually the finishing touches. I tend to make music that takes a listener on a journey, so I definitely put in a lot of thought into my production. However, I usually never know how the song will end up sounding until I start working and it’s finished. That’s one of the biggest reasons why I love producing. I’m always learning more about myself through the process and I’m constantly surprising myself when I hear the final result. 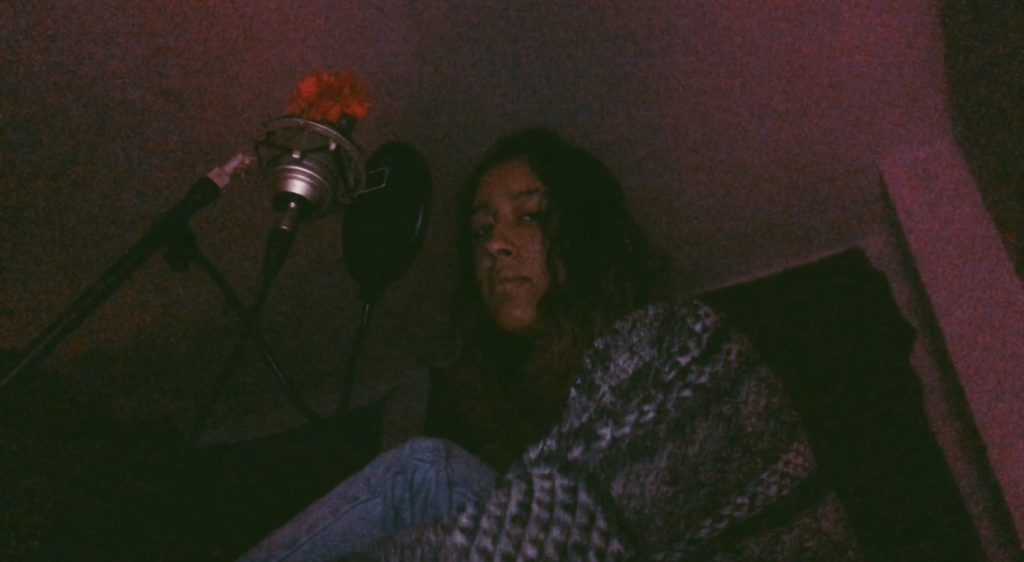 Do you consider full control about your music a core part of your artistic identity, like it is for example for Grimes? When you collaborate, are you ok with just singing or would you always want to work on the production as well?

Yea, I definitely enjoy doing everything myself! I’m getting to know myself more as an artist/person and the workflow is always faster. I really want to be able to do everything myself one day. I’m currently learning how to master my own tracks, but there’s always more that I can learn from others. I also want to make everything that’s inside my head come to life, without any hesitation.

I’m totally fine with just singing on a track. However, writing what I’m singing is definitely more important than anything else. I love singing and it can be nice to have the entire production off my hands, especially if it’s a really good track! For example, my collaboration with Lucian on “Real or Fake” was really fun to do and I’m obsessed with how he produced the instrumental. I was able to have fun writing the lyrics and singing on the track. I always learn something new in a collaboration and it’s interesting seeing how others work. I’m always open to producing with others, but currently I’ve just had little time, as I’m still working on a lot of other projects. I’m excited for them to all be released!

You contributed a song for the album “Talk – Action = Zero Vol.2” Rough Trade publishing. How did you become involved in this project?

I’m currently working with an up and coming label called Internet and Weed and they work with various music licensing companies, so that opportunity came from one of their connections over at Bank Robber Music. It was really cool to have my track “LOCAL TRAIN” on the album compilation, as it’s unreleased. The song is about feeling stuck in the same routine and letting myself know that it’s going to be ok. Now living in a pandemic, this song has never felt more appropriate. The track will be on my debut EP 11:11, so others will be able to discover it on October 16th. My track and a few other I&W artists such as The Brazillian Gentleman, Third Culture Kings and TOBI were also featured on Variety because of the album compilation, so that was definitely cool to read! 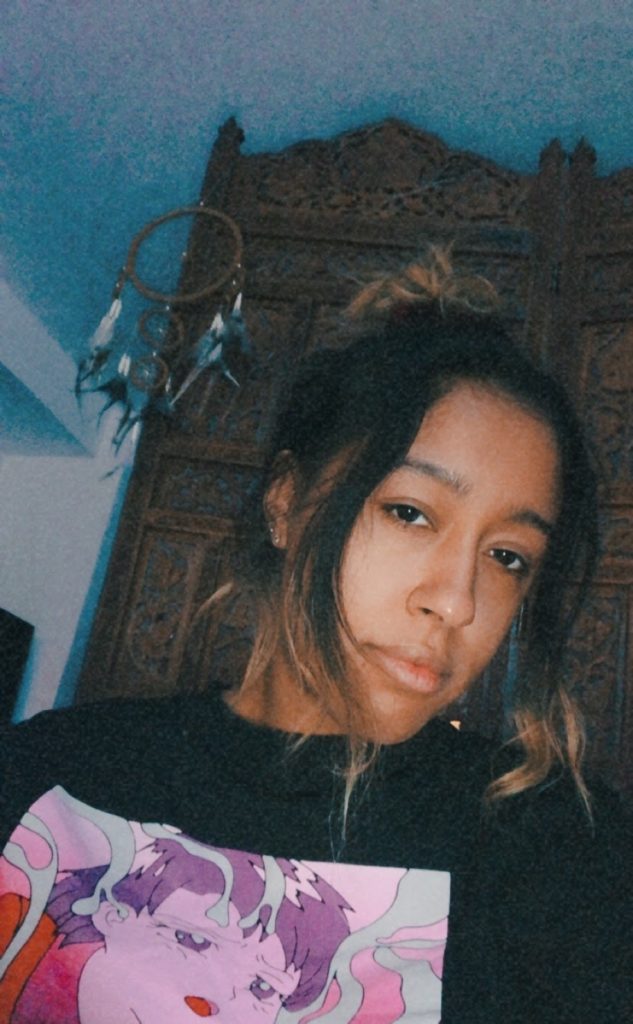 Do you have plans for a live show, once this is possible again?

I would love to perform live when the time is right, but I don’t have any set plans yet. It’s hard to say when it will feel right to perform in person again and this coming from a person who lives in concert venues, so I’ve been gutted! I’m usually seeing shows every month, so it’s been painful to not see my favorite artists live. Although, I was a part of a virtual music festival this summer, which felt more complicated than a live performance. There are just too many technological factors that go into a virtual set. It’s a hard balance to make sure that the set looks good and the viewers are listening to clear audio, so I’m totally looking forward to performing at a real show someday soon! I think it’s also the best way to form real connections with your listeners. I’m hoping that I can plan a small tour with a few of my close music friends when it’s safe to perform again. If I do find an opportunity that looks safe and promising for a “live” performance then I’m totally going to take that opportunity!

What is next for River Hooks?

I have so much more music coming out, it’s hard to wrap my brain around it! I’m currently really excited to be releasing my debut EP 11:11 on October 16th. I have a secret collaborative project that’s in the works and will hopefully be out before the year is over. I’ll be releasing a self produced cover of Beabadoobee’s song “If You Want To” out in December which is also very exciting because this will be my first cover to be released on all streaming services! I’m also currently working on my second EP, which will be coming out sometime 2021. A lot of good things seem to be happening really fast, so I have no idea where I’ll end up in the next few months. I can only hope that more people will discover my music and I can connect with them through my work. I’m just going to keep releasing music until the end of time haha. I’m really grateful to everyone who’s been supporting my dreams, so if you’re reading this, thank you!

Nobody likes the 20s so far. If you could escape, what would you be your favorite decade?

I love the 80s, so I would definitely escape to that decade! I’m obsessed with 80s films, especially John Hughes, but by far the music from that time has always been a huge part of my life. I’ve always felt like an 80s kid because of my parents. I grew up listening to a lot of 80s music, so many of my favorite bands are from that decade. It’s a cool era, even today everyone still tries to bring the 80s back, so I’m down for the movement! haha

Thank you, River! We’re with you regarding the 80s and “The Breakfast Club” is one of our favorite movies.