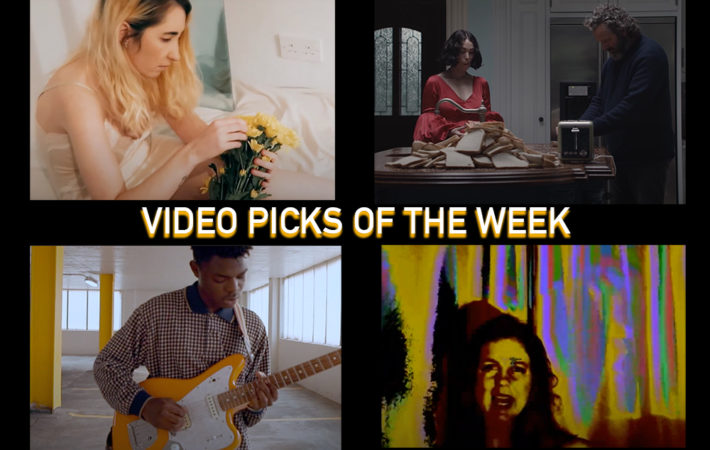 Irish singer and producer Host is suffering from a particularly painful breakup in her latest song “Borderline.” The video does not beautify the situation: the pain is real and does not subside any time soon. Host says about the song:

Like a frog in boiling water, you don’t notice the signs until it’s too late. There is a layer of toxicity you don’t notice until your mental health suffers the consequences. Once things have ended and the weight is lifted off your shoulders, you don’t realise that it is gone right away and you allow isolation to warp your mind. I wanted the video to feel like your mind, thoughts and emotions have been to war, to show the stages of grief without the acceptance, or a silver lining.

The basis of a great music video are a great idea and great music. Welsh producer/musician Kelly Lee Owens made a name for herself in the electronic and dream pop scene and should become a household name with the hypnotizing “Corner of my Sky” and the accompanying music video. Not only does the chill song feature John Cale, but the video features Michael Sheen starring in it. It is one of the music videos you can not get tired watching on repeat thanks to its sheer brilliance and mesmerizing vibe.

Owens provides the following insight about this creative collaboration:

“I knew I wanted a visual for ‘Color of My Sky’ and having been connected to Michael Sheen earlier in the year, I dared asked if he would like to be involved. Luckily he said yes! In Wales we live by the sentiment that ‘If you don’t ask, you don’t get.’ And so a true welsh collaboration in the form of John Cale, Michael and I was formed. The idea for the video was changed (very) last minute by Kasper, a Norwegian director who I have worked with on my last few videos including ‘Throwing Lines’ and ‘On’ and it was weird, trippy and hilarious – the perfect combo! Michael’s performance alongside John’s vocals and the magic toaster portal is gold and something I’m very happy to have out in the world.”

“Winona” the lead single and music video for Miloe‘s upcoming EP are irresistibly charming.  Behind the moniker, Miloe is Bobby Kabeya, a young artist who was born in the Democratic Republic of Congo and could be reunited in Minneapolis with his father, a journalist who was granted asylum three years prior. With his upcoming EP “Greenhouse”, Miloe is celebrating Summer, and the weather he’s been used to. He says:

“The Minnesotan climate can feel so limiting compared to where I grew up, almost like we’re waiting half the year to actually live our lives.”

Miloe makes a wonderful splash with his particular style of fingerpicking and the joyful and romantic “Winona”, and its bright and sunny feel.

Optic Sink is the duo of Natalie Hoffmann and Ben Bauermeister from Memphis, Tennessee. “Personified” is a raw electronic track, one that you would expect to have heard in a dark basement bar in the 80s. The video mesmerizes with swirling colors and an artful mix of futuristic and retro vibes. Optic Sink released their self-titled album today (Apple Music | Spotify.