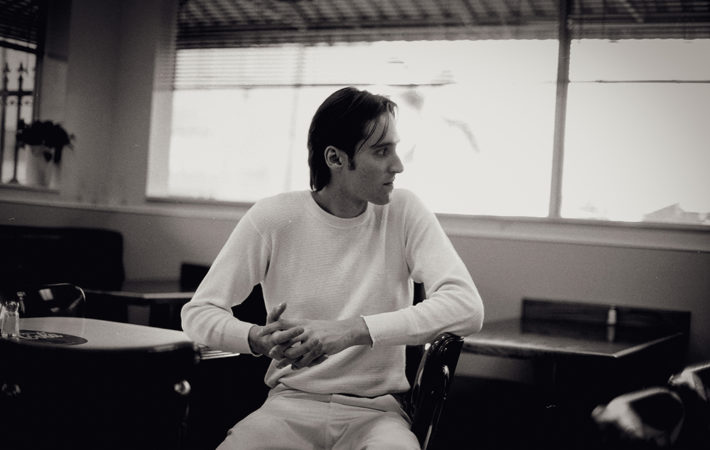 Vases is the moniker of Los Angeles-based musician and visual artist Ty Baron, who creates shoegaze influenced dream pop with provocative, intelligent lyrics. “Postwar Fiction” is the first single from Vases’ upcoming album titled “Pure Plastic Art!”, scheduled to drop next year. It is produced and engineered by Omar Yakar (War on Drugs, Perfume Genius) whom Baron met in a bar, where they immediately bonded over a mutual affinity for pulsating, post-punk guitars.

The guitars on “Postwar Fiction” are prominent, blissfully shimmering but so is the driving beat, creating an atmosphere of joyful urgency. Add Baron’s powerful and earthy vocals, including sincere lyrics to the mix, and ready is a truly glorious debut single!

Upon truly digging “Postwar Fiction”, we reached out to Ty, and asked him about the background to the song. He says:

“‘Postwar Fiction’ was written in the summer of 2018. The inspiration for the lyrics came while I was on a trip visiting New York. I was in Williamsburg pretty close to the water and I found a book on the sidewalk that chronicled the development of the United States in the early 1900s through photographs. I was flipping through it and looking out at the water and I started to imagine this idea of the “American Dream” being washed back into the same Atlantic that brought the settlers here.”

That’s so imaginative! Not having been to the East River in Williamsburg until recently, it currently very much feels like the “American Dream” being washed back or… away entirely. But Ty explains further:

“The final recording was done in the middle of 2019 at Boulevard recording in Hollywood. I was working a very demanding job doing catering for fashion photo shoots and in order to work around it most of the tracking had to happen at really late hours of the night. A lot of the sessions would go from 11pm until 5 or 6am. The recording features members of the bands Midnight Faces and Flaural, two great bands and friends of mine.”

Cheers, to great friends who help to get things done! “Postwar Fiction” is an exciting first taste of a certainly interesting debut album. “Interesting” for lack of a better term without having listened to the entire album yet. For now though, listen to “Postwar Fiction”, our Song Pick of the Day:

Connect with Vases on Facebook, Twitter, and Instagram and add “Postwar Fiction” to your playlist as we are adding it to our glamglarepick playlist on Spotify: