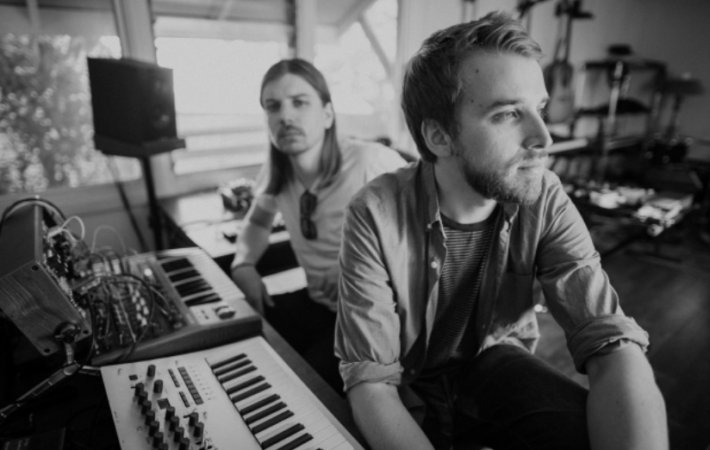 Mines Falls is a Los Angeles-based electronic indie-rock duo comprised of brothers Carson and Erik Lund, who work in film and design by day and create utterly enchanting pop music by night or whenever their time allows. “From Behind Glass” marks the third and last single before their self-titled album drops this Friday.

The latest single follows the equally compelling “Red Moon, Car Wreck” and “Hey Mother” (watch the video) and the entire album, is nothing short but magnificent, with many more gems to be uncovered. What we especially like about the album, which “From Behind Glass” is such a wonderful example of, are the exquisite percussion and tempo changes, the balanced synths melodies, all held together by beautifully nuanced vocals. We also know that the label “reminds me of Radiohead” is thrown around fairly quickly these days but… think of the excitement of “In Rainbows” and then you’ll get an idea of what you can look forward to when listening to “Mines Falls”, the album.

Carson Lund says about “From Behind Glass:

“In some ways this song epitomizes the sound we were gravitating towards with this album: angular, unsettling, and neither organic nor fully electronic. A wonderful musician from Chicago, Matchess, who also performed in a feature film I shot in the summer of 2019, plays the beautiful strings, which provide a counterpoint to Erik’s sharper analog synth sounds. Like several other songs on this album, the lyrics paint a portrait of a deteriorating relationship that’s a few parts autobiographical and several parts fiction.

Listen to “From Behind Glass”, our Song Pick of the Day:

Connect with Mines Falls on Facebook, Twitter, and Instagram and add “From Behind Glass” to your playlist as we are adding it to our glamglarepick playlist on Spotify: