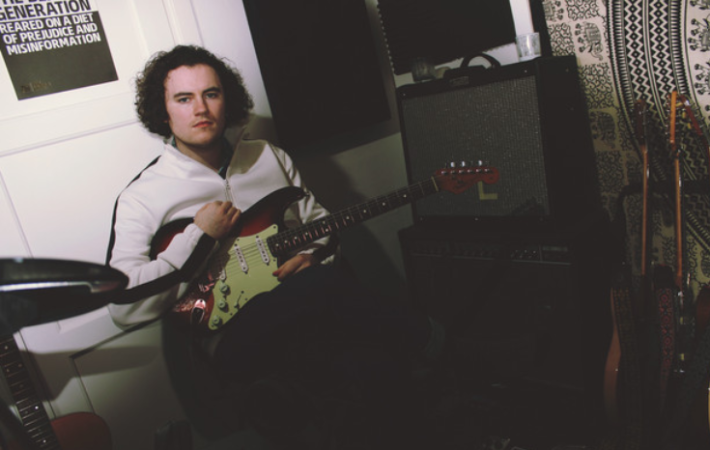 Earlier this year, we featured Daragh‘s song “Pretend” and realized that we had written about the Irish singer, songwriter, and producer before when he was part of the more electronic-leaning duo Company Ink. What makes someone leave a successful musical project and start a solo career? Curious, we checked out Daragh’s music and decided to reach out to him, to learn a bit more first hand.

Listen to Daragh’s new single “All Those Things” and let’s dive into an exciting interview.

Thank you for taking the time to speak with us. Can you tell us a little about your beginnings in the music world?

Thanks for having me. Yeah, I picked up the guitar when I was 12 years old (somewhat reluctantly), but I fell in love with it pretty quickly when I found I could kind of play some of my favourite songs. I began recording and writing stuff when I was 13, and that was that really. I played guitar in some musicals and live shows when I was 15-18. Wasn’t really for me, but I learned a lot from it and met some good people. I started a band called Endlings in secondary school when I was about 17, and we released an EP in 2016. We had a song featured on a pretty popular TV show in Norway, but we didn’t really gig much after everyone moved to different cities, and we kind of stopped playing together not long after that. We’re still good friends though.

When we first came across your music, you were part of the duo Company Ink. Now you are pursuing your music as a solo artist. Is this your musical direction, or are you planning to work on multiple projects?

This project is my main focus, but I do kind of sporadically work either as a producer or studio musician with various people and bands. I have a couple of side projects, but for now they are just that.

With Company Ink, you were living in Norway and were nominated by Norway’s biggest radio station P3 as “best indie band of the year 2018.”

Yeah, that was a great experience. We were nominated alongside girl in red (who is now a household name pretty much everywhere) and brenn. Who are one of Norway’s best live bands. We were without a doubt the underdogs of the contest, but we were just happy to have been nominated.

Yes, I was born in Dublin and lived there for a few years as a child, before moving to Norway. They are a bit different, yeah. I think Norway is a bit more accommodating of new and up and coming bands, which is great. There are certainly those that do their bit to help new bands in Ireland, like Dermot Lambert with Garageland, who’s played my music a few times, which I’m very grateful for. Norway has plenty of festivals, competitions etc. made specifically for indie bands and artists, though. Maybe Ireland does too, that I just don’t know about, but that’s my impression. I’d say Ireland is in some ways better for live music though, as there are venues of all sizes all over the place.

Which song of yours would you recommend to someone who has never heard you before? Why?

That’s a difficult one. I would’ve said “Pretend” as I felt that was the most poppy song, but I think my latest single “All Those Things” is probably a better introduction to my music. It has a nice blend of synth and guitar, I think, whereas my other songs lean a bit more in one direction. Either synth-based or guitar-based.

Among your releases over the last twelve months is also a cover of The Beatles’ “Across the Universe,” which is very beautiful, especially for its calm feel and stellar guitar work. Who sings on the track?

Thanks very much. I think it’s a beautiful song, and I felt I had to learn it on guitar. My girlfriend Ida sings on that version. She also sings on one of my aforementioned side projects, Sinefield. We haven’t released anything yet, but we will eventually.

A quick look at your YouTube channel offers a few more cover versions of popular tracks. What is the most exciting challenge for you when covering a famous song?

Yeah, I had a lot of time on my hands thanks to COVID-19. I enjoy trying to pick out what’s going on in songs, both from an instrumental perspective and a more technical, production/mix perspective. The latter of which can be quite challenging, as you only hear what the mix lets you. So, some things can be slightly hidden and you’re left wondering why what you’re playing doesn’t sound exactly the same. Particularly in the case of some of the songs I’ve covered, where there are layers upon layers of guitars and synthesizers. There’s also the dilemma of whether you want to emulate or make your own version. Good fun though.

Does creating a cover song help you with your own songwriting? Does it spark new ideas? Something you would recommend doing?

For me, it’s very educational in terms of production and mixing. It’s like taking apart a puzzle and trying to put it back together with pieces you made yourself. Seemingly impossible, but you might end up with something similar and learn something in the process.

If you could have any musical instrument in the world, which one would it be and why?

Let us think of better times ahead! What is one of your favorite venues in Dublin to play at? Where should we come to see you? Or where do you like to go to see a live show yourself?

Yes, let’s! I’ve opened up for These Charming Men at the Village once, and played with them there a few times. That’s a good place. I also played at Whelan’s with my dad, Gavin Murphy. (who just released his first solo album) Also a great venue. I also like Vicar Street and The Academy, but I’ve never played there. Hopefully someday.

Always curious about which decade to live in an artist chooses. If you could choose to live in any decade, for its music, style, fashion, innovation, etc. Which one would it be?

That’s a hard one. Sometimes I wish I lived in 1980s Manchester or London. Other times I wish it was 1960s California. I think maybe I’d have to go for the 1980s somewhere. It would be hard to get into music without all the great stuff that came out in the 60s and 70s as inspiration. In terms of fashion, I like all of the above, really. Give or take a few hairstyles.

This was fun and inspiring! Thank you so much, Daragh for answering our questions. Now we’d like to know why “guitar only reluctantly”, and maybe have an idea why… We also would love to discuss the 80s some more with you.  Maybe in person when we can see you live somewhere hopefully soon.

Connect with Daragh on Facebook, and Instagram. and listen to more of Daragh’s music on Apple Music or here: