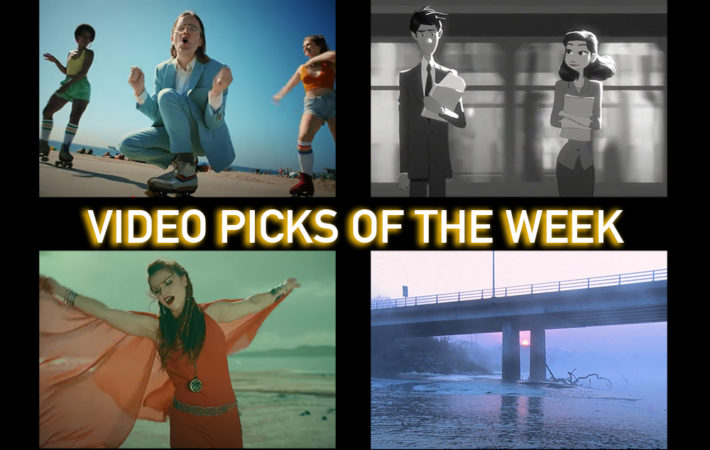 “Sea Salt & Caramel”, the song AND the music video by Mississippi-born and Los Angeles-based artist Dent May have the potential to make you happy. For a little while anyway. At least as long as you are listening to the exuberantly joyful melody and are watching the sunny sweet video. Is there a thing as too much feel-good nostalgia and an unabashed happy vibe? We don’t think so. And it gets even better since Dent May just released his new full-length album “Late Checkout” with more of the good.

Geoff Westen – High on You

“High on You” is such a beautiful little short film and impossible not to love! It puts a big, happy smile on our faces. “High on You” is the creation of Jean-Louis and Geoff Westen.

Geoff Westen in his own words about the video:

“Boy connects with girl one morning at the train station on his way to work. Boy experiences love at first site. He’s got it bad. But he loses track of her. He goes to great lengths trying to get her attention again. The twist is he DOES connect again BUT he doesn’t know it. Our story has a happy ending and a sad ending depending on which character you are following. Check it out.”

When Utah-based singer/songwriter Robyn Cage released her song “Warrior,” one could expect some exciting visuals for it. The video does indeed not disappoint: more fantasy than her past apocalyptic sceneries, it feels like the trailer of a big screen Hollywood production. And yes, Robyn actually did walk into that partially frozen lake.

We are fans of Welsh producer and multi-instrumentalist’s Tomos music and are looking forward to his new EP “Count The Seconds’”, out on August 26th. It is said to be a “rich and eclectic blend of summery electronics and ambient textures.” “Count The Seconds” is one of the songs on the EP, and the accompanying video adds to the anticipation.

The video directed is directed by Owain Morgan, while the actual artwork comes from Geraint Morgan. Tomos says about the video:

“‘Count The Seconds’ is about sitting peacefully and listening intently to the relationships between sounds in a relaxing space. I had always imagined a video for this song to be something very simple, shooting some of the many calming spots that are scattered around my home town of Aberteifi/Cardigan. Luckily for me, I have two very talented younger brothers who both work in film and visual media and arts. While it was Geraint who made the artworks for the EP, Owain made the video with some old footage he had shot a few years ago that he had forgotten on an old hard drive. He did a great job of capturing some beautiful moments of peace all those years ago, perfectly representing what I had in mind during the writing process.”

The visuals paired with the sound in “Count The Seconds” have a beautifully calming yet also uplifting effect. Watch the video now:

Let the mind decelerate
Take it easy in the slow lane

Don’t give up
It’s enough