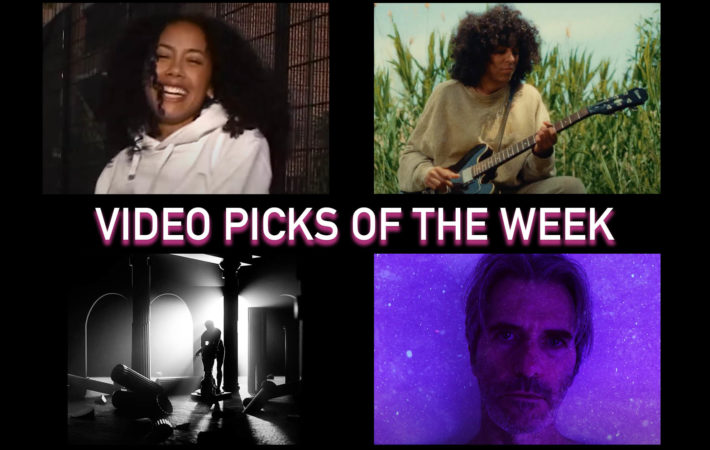 Jayda G – Both of Us

Jayda G is a producer and DJ from Canada, who now lives and works in London and her video “Both of Us” radiates the pure joy of life. It surly gets the party started, in particular in times where other options are limited.

The video Amsterdam-based singer/songwriter Nana Adjoa shows a scene that looks like a wonderfully relaxed and loving family party in the outdoors, complete with some mildly snarky remarks by the elders.

This video is all but mesmerizing: set in a 3D-rendered, fictional greek temple it constructs and deconstructs the architecture in a play of shadow and light. Add the snoozing synth pop by Paris/Brooklyn band Rio Tigre around Raphael Pazoumian and you have an audiovisual gem, ideal to find some calm in the day.

The Beautiful Fear – The Arndale Whale

As fans of The Beautiful Fear‘s record “One”, which made it into our 2016’s Favorite Albums, we were waiting for album number “Two” to drop. Turns out, the second album is titled “The Waltz Of The Moonshine Blind”, and out on August 28. Brooklyn/Miami-based British musician and producer Matthew Bannister is behind the moniker The Beautiful Fear, creating epically lush sound, with a cinematic and deeply personal narrative, told with soothing vocals with a psychedelic vibe. We are looking forward to listening to the entire record but for now, the eight minutes long dreamlike video for “The Arndale Whale” is the perfect teaser for more to come.

Matthew Bannister in his own words:

“‘The Arndale Whale’ is about a child, a crime, addiction-as-disease, and how a wooden whale—a childhood anchor— disappeared from a shopping center in the town of Poole, UK. It’s about how nostalgia unleashed one buried memory after another and how that ripple effect resulted in a relapse back in 2012. The video is very purposefully not a ‘music video’. My intention was to make an abstract short (art) film that is a visual synopsis of the entire narrative (autobiography) of the forthcoming double album.”